World Heritage City, Mozart's bithplace, the location of The Sound of Music, the meeting place for top culture at the annual Salzburg Festival, and interspersed between are spacious squares, hidden inner courtyards, small alleyways and two mountains in the middle of the city. To describe Salzburg with just one word is impossible.

World Heritage City, Mozart's bithplace, the location of The Sound of Music, the meeting place for top culture at the annual Salzburg Festival, and interspersed between are spacious squares, hidden inner courtyards, small alleyways and two mountains in the middle of the city. To describe Salzburg with just one word is impossible.

The provincial capital of Salzburg is worth a visit in every season. In spring, when the coffee houses set their tables in front of the door and the magnolias are in full bloom all over the gardens. In summer, when the Everyman stage covers the cathedral square and the beautifully dressed festival guests stroll through the city. In autumn, when the leaves on the Mönchsberg and the Kapuzinerberg change colour and the first Chestnut roasters setup their ovens. In winter, when the large and small festively illuminated Christmas markets offer their goods.

Salzburg – known in the Roman era as Juvavum – has a long and varied history. Founded at the end of the 7th Century, Salzburg was at the beginning of the 19th Century known for its “White Gold”. The Salt from the Dürrnberg near Hallein brought the city not only its name, but also wealth and prosperity. Thus, the provincial lords of the time, the Catholic Prince-Bishops, were able to build a metropolis which is still today called the “Rome of the North” thanks to its Italian flair.

Salzburg as a Tourist Magnet

Today, the city attracts countless tourists every year who are enchanted by the uniqueness of Salzburg. And you can easily and gladly spend a few days here without getting bored. Many attractions, over 4,500 cultural events each year, numerous museums and galleries, gardens and parks with extensive green areas or a shopping trip through the old town make for a lot of variety. 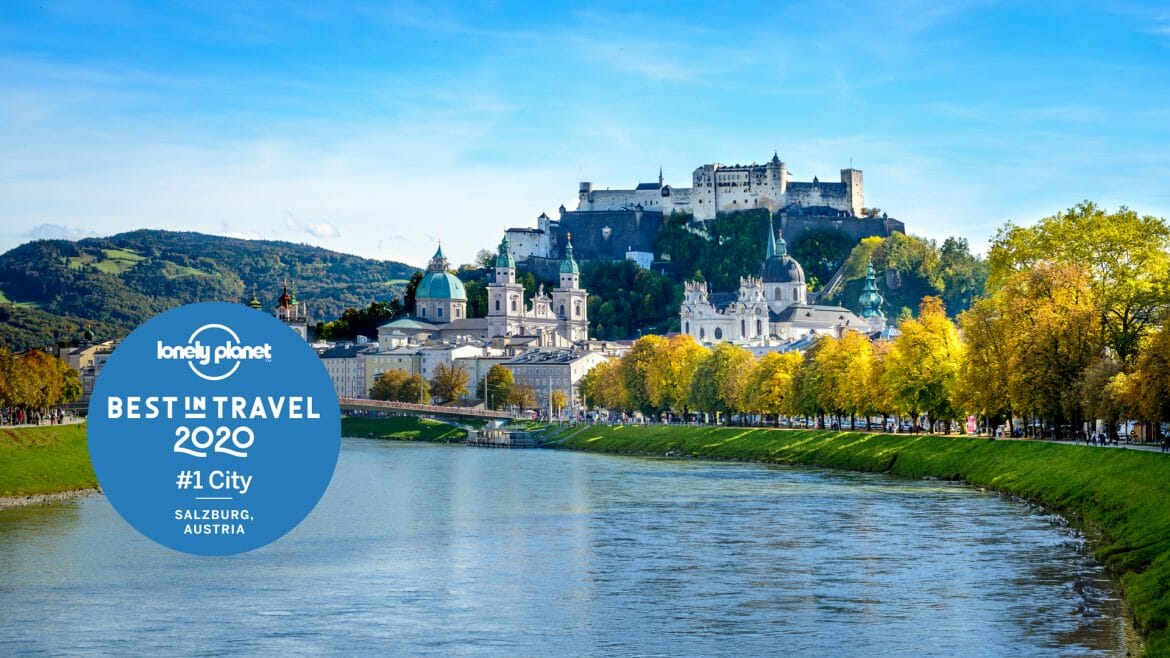 For Lonely Planet, the biggest travel publisher globally, Salzburg is the Number One on its “Best in Travel 2020” list of the world’s most attractive cities. With the centennial of the Salzburg Festival in the center of attention, this award affirms the uniqueness of Salzburg as a Baroque city of culture and music.

Top-Tips for Attractions and Museums

TOP Tip: The Salzburg Card offers free entrance to Salzburg’s museums and attractions, free rides on the Salzach boat, the fortress tram and the Untersberg cable-car, as well as free use of public transport. Owners of a Salzburg Card also receive numerous discounts for concerts, theatre visits or excursion destinations in the area.

Of course, Salzburg and music are inseparable, mainly because of Wolfgang Amadeus Mozart who was born here on the 27th January, 1756 in Getreidegasse No.9. Mozart composed 350 of his most beautiful works here. With his music, the most important and most played composer in the world, he impressed the history of music in an incomparable way. Several music events are named after him.

With “The Sound of Music”, Salzburg also conquered Hollywood. The film, awarded with five Oscars, was filmed in the city of Salzburg and its immediate surroundings. The filming locations can still be visited today.

The stage of the world: Salzburg is waiting for you.
Load video
You can activate the display of this element via the button. By activating the integration, the browser exchanges data with the respective providers. The current page has no access or influence on the content, type, storage and processing of this data. By clicking on the button, you allow the cookie agreedtoyoutube, you can revoke this cookie under the privacy settings.
Offers Salzburg
Online-Ticketing for the Mönchsbergaufzug lift in Salzburg
No waiting times: Plan your trip in advance and visit the Museum of Modern Art, the Restaurant M32 and the Wasserspiegel Museum and enjoy the fantastic panorama of the old town of Salzburg!
From
5,00
€ per person/ticket
Show offer
Experience unique treasures in Salzburg and at Wolfgangsee!
Discover the SchafbergBahn, WolfgangseeSchifffahrt, the funicular to the Hohensalzburg Fortress, Mönchsberg lift and WasserSpiegel Museum with one single ticket
from
72,00
€ for one 5 Treasure Ticket
Show offer
Online-ticketing for the funicular to the Hohensalzburg Fortress
Buy online and save cash and especially your precious time
From
11,00
€ per person/ticket
Show offer
SalzburgerLand brochures
A brief description of all holiday regions, a large road map, selected sights and attractions as well as valuable addresses and telephone numbers.
Order free of charge
Offers from our premium partners
The best ideas for your summer holiday: let yourself be inspired!
To our recommendations