A short history of the Salzburg Festival

What started with an "Everyman" performance in 1920, has today become one of the biggest classical festivals in the world. A lot has changed over the last 100 years where this festival has become truly anchored in Salzburg. Here is a look at the histoy of the Salzburg Festival.

How did the Festival start?

Long before it was founded in 1920, there had already been discussions about hosting regular music festivals in Salzburg in honour of the city’s most famous son – Wolfgang Amadeus Mozart, naturally. But this idea only became a reality towards the end of the First World War when Max Reinhardt, Hugo von Hofmannsthal and Richard Strauss decided to go ahead with this idea. As a counterpart to the Bayreuth Festival, the Salzburg Festival was tasked with performing its artistic heritage as well as the latest works by Austrian composers. 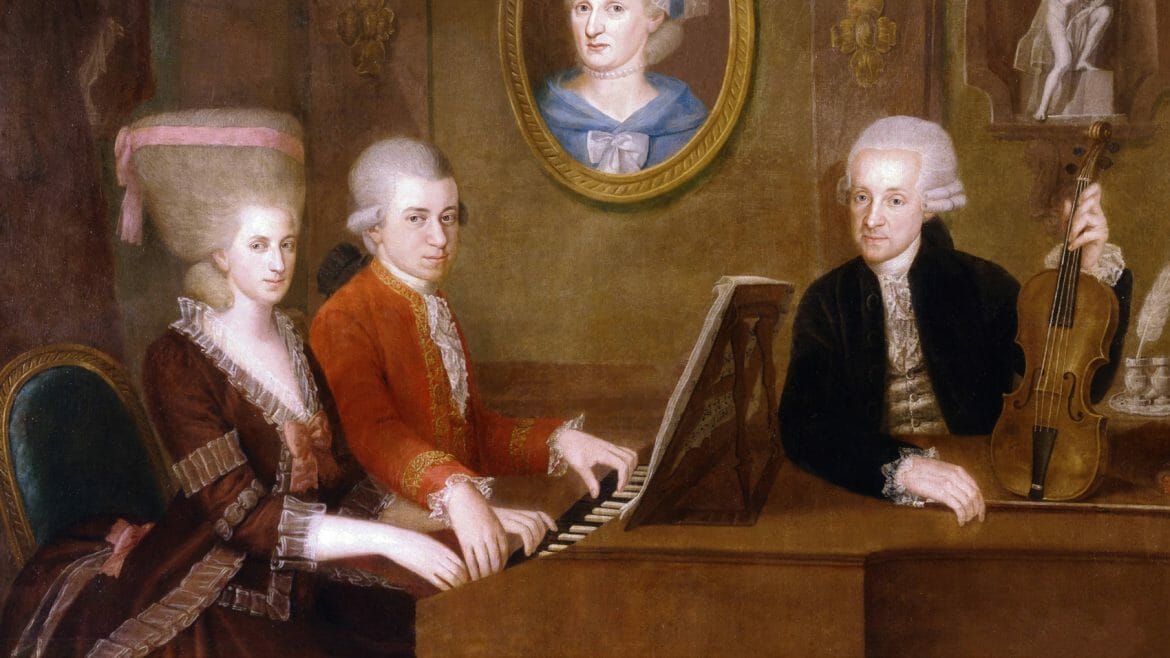 Wolfgang Amadeus Mozart with his sister Nannerl and father Leopold

In 1917, during the First World War, Friedrich Gehmacher and Heinrich Damisch founded the association “Salzburger Festspielhausgemeinde”. Its stated aim was to promote the construction of a Festival House in Salzburg, in which Mozart Festivals were to be held regularly. Also in 1917, Max Reinhardt forwarded his “Thinking Paper on the Construction of a Festival House in Hellbrunn” to the Director of k.k. Court Theatre in Vienna. In it, he emphatically promoted festivals in Salzburg “as the first work of peace”. The idea of setting up festivals in Salzburg was subsequently taken up by numerous artists. The founding fathers are Max Reinhardt, Hugo von Hofmannsthal and Richard Strauss.

In the Mozart City of Salzburg, far away from the hectic hustle and bustle, “in the heart of the heart of Europe”, the best artists should meet every summer to bring opera and drama to the stage. These are to be “Of both the highest”, as Max Reinhardt wrote in 1917 in the founding script. Hugo von Hofmannsthal added: “Our Salzburg Festival House should be a symbol. It is not a theatrical foundation, not the project of some dreamy fantasies and not the local affair of a provincial city. It is a matter of European culture. And of eminent political, economic and social significance.”

The Salzburg Festival is born

22 August 1920 was the day – Hugo von Hofmannsthal‘s Everyman, directed by Max Reinhardt, was performed in front of the cathedral, as it still is today. There were four public performances and two evenings were reserved for the locals. One year later it included orchestral and chamber concerts. And when in 1922 various operas by Mozart were performed for the first time, the Festival had established its three main pillars, which still exist today, i.e. operas, dramas and concerts. After a short relapse (the Festival had to be cancelled in 1924 due to financial reasons), the Festival continued to grow, adding more days and additional venues.

New start after the war

National socialism and the intervention of the ruling powers in Berlin and Vienna in cultural policy changed the face of the Festival. Some composers and works were no longer allowed to be performed, artists stayed away, or had to stay away. Stauffenberg’s failed assassination attempt in 1944 led to the cancellation of all festivals throughout the entire Third Reich.

After the end of the war, the Festival was held again, albeit a much smaller version, with Everyman back in the programme. With the country being rebuilt and a new political system in place, conductors and musicians who had not been welcome during the war returned to Salzburg. The Festival’s golden era followed.

There are many great conductors e.g. Georg Solti, Wilhelm Furtwängler, Karl Böhm, but one man stands out, Herbert von Karajan. Born in Salzburg – only a few hundred metres away from today’s Festival district – he was the key figure of the classical music festival from 1960 until he died.

One of his greatest achievements came in the shape of the Easter Festival in 1967 and the Whitsun Concerts in 1973, which was later renamed Whitsun Festival. So he not only created something exciting on the stage, he also created some of these stages himself. 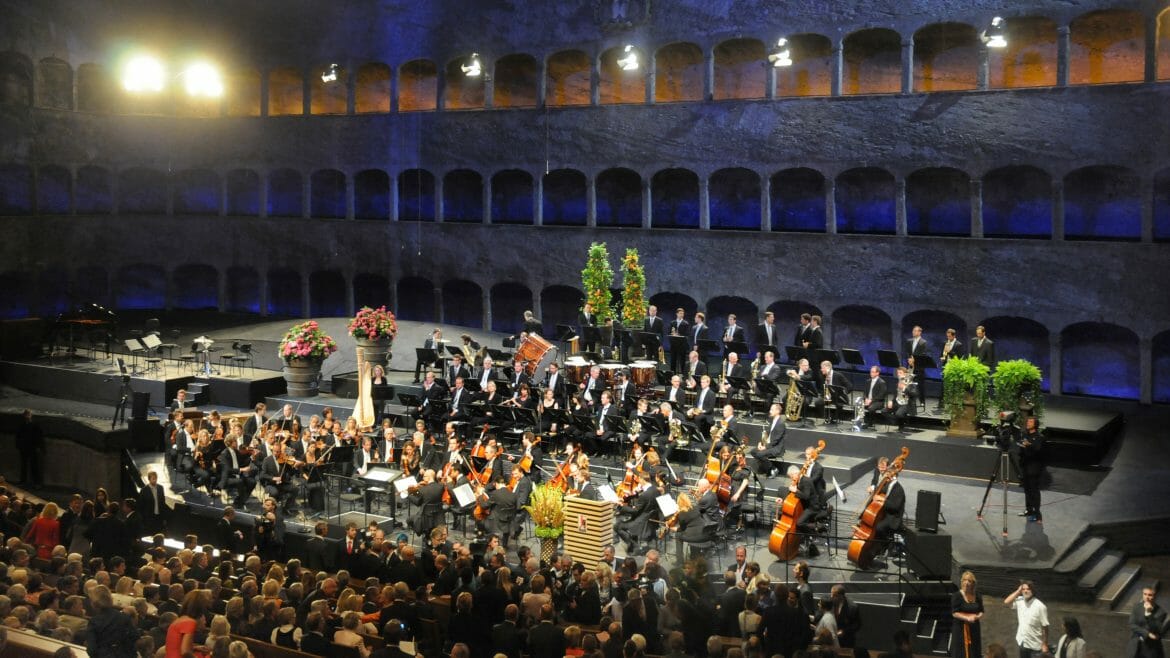 When Herbert von Karajan died during the rehearsals of Verdi’s Masked Ball in 1989, the Festival lost its leading figure. It created a vacuum that could only be filled again piece by piece. Gerard Mortier became the director in 1991 with the aim to modernise and rejuvenate the Festival. Premiere performances of new operas were as much a part of his course as was staging more theatre plays. His commitment paved the way for the Festival as we know it today – a celebration of music that reverberates throughout the city of Salzburg for several weeks every year, a festival that takes pleasure in its rich cultural heritage but is not afraid to try out new things – this had also been Max Reinhardt‘s and Hugo von Hofmannsthal‘s founding idea …

Everyman is and will always be the centrepiece of the Festival. Taking part in the production is regarded as the highest honour an actor can receive.

The very first Everyman was Alexander Moissi. Since then, some of the best theatre actors from German-speaking countries have performed in front of the cathedral, including Attila Hörbiger and Klaus Maria Brandauer.

The love interest was played by Johanna Terwin in the Festival’s founding year, followed by some great names since then, such as Judith Holzmeister, Christiane Hörbiger, Senta Berger, Veronika Ferres and Birgit Minichmayr.

If you want to find out more about the history of the Salzburg Festival, go to their website where you’ll find a very interesting chronicle divided into years and productions.

The first Everyman was Alexander Moissi. Since then, Attila Hörbiger and Klaus Maria Brandauer have been among the best theatre actors in the German-speaking world. Cornelius Obonya played the role until 2016, replacing Nicholas Ofczarek in 2013. Lars Eidinger is currently taking on the legendary role. The first “Buhlschaft” was Johanna Terwin, who was to be followed by big names such as Judith Holzmeister, Christiane Hörbiger, Senta Berger, Veronika Ferres, Stefanie Reinsperger and Valery Tscheplanowa.