Sound of Music – The true story

Discover the story of the real Trapp family

It is no secret that filmmakers often use poetic license and as a result fact sometimes becomes fiction. It therefore goes without saying that the real story behind "The Sound of Music" was tweaked for dramatic purposes and details were at times exaggerated. However, the parallels between reality and fiction are clear to see. In SalzburgerLand, not only can you visit the film locations but you can also walk in the footsteps of the "real" Trapp family.

The Trapp family and the First World War

The Trapp family lived during a time of great suffering, change and upheaval. Two atrocious wars were to change the world and have a huge impact on the family. Shortly before the First World War, Georg Freiherr von Trapp, a captain in the Austro-Hungarian Navy, married Agathe Whitehead. During the war years, the Habsburg monarchy collapsed and the submarine commander was forced to find a new job. The family, who had been blessed with seven children between the years of 1911 and 1922, had to move several times. Shortly after they settled in the town of Klosterneuburg, Agathe fell ill with cholera and died.

The Trapp family moves to Salzburg

In 1925, Georg von Trapp moved with his children (Rupert, Agathe, Maria-Franziska, Werner, Hedwig, Johanna and Martina), to a district known today as Aigen in Salzburg. He employed a novice called Maria from Nonnberg Convent to act as a governess for his children. Within a very short space of time, the children developed a strong bond with Maria and she became much more than just a teacher to them. In 1927, Georg and Maria married and had three children (Rosmarie, Eleonore and Johannes).

A choir is established

Maria sang often with the children when she was their governess. When the bank the family used went bankrupt and they lost all their savings, they formed a choir together and were discovered during a singing competition at The Salzburg Festival. It wasn’t long before they went on to make a name for themselves touring throughout Europe and the USA as the “Salzburger Kammerchor Trapp”. 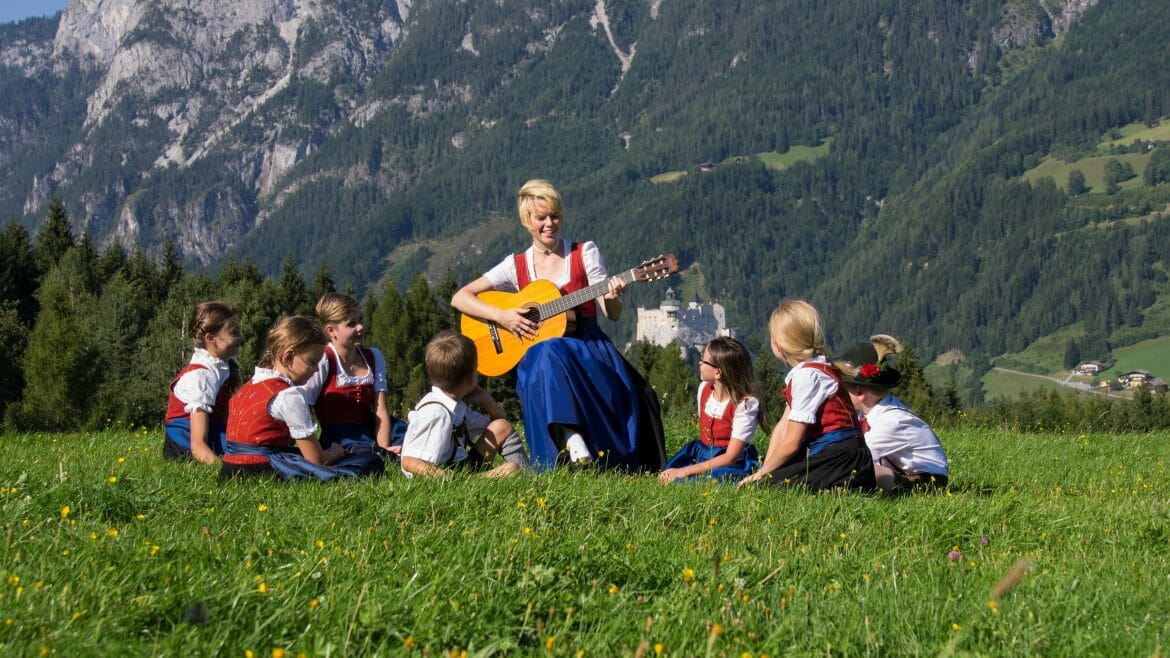 The Nazi era and the Second World War started to become a real threat to the family, and Georg von Trapp was opposed to Adolf Hitler’s morals and ideals. Soon after giving a concert in America, the family decided not to return to Austria. They settled in Vermont and conducted successful tours in the USA for many years.

In 1947, Baron von Trapp died. Music continued to play an important role in the lives of Maria and the children.

The Trapp Villa in Salzburg

The Trapp Villa can still be visited today. Today the family’s former residence is a hotel and can be found in the district of Aigen in Salzburg. Guided tours take place every day at noon. The emphasis of this tour is on the real history of the Trapp family, and guests are offered whole new perspectives on the story of “The Sound of Music”.

Offers
Online-ticketing for the funicular to the Hohensalzburg Fortress
Buy online and save cash and especially your precious time
From
11,00
€ per person/ticket
Show offer
Offers from our premium partners
The best ideas for your winter holiday: let yourself be inspired!
To our recommendations
Online-Ticketing for the Mönchsbergaufzug lift in Salzburg
No waiting times: Plan your trip in advance and visit the Museum of Modern Art, the Restaurant M32 and the Wasserspiegel Museum and enjoy the fantastic panorama of the old town of Salzburg!
From
5,00
€ per person/ticket
Show offer
SalzburgerLand brochures
A brief description of all holiday regions, a large road map, selected sights and attractions as well as valuable addresses and telephone numbers.
Order free of charge
Experience unique treasures in Salzburg and at Wolfgangsee!
Discover the SchafbergBahn, WolfgangseeSchifffahrt, the funicular to the Hohensalzburg Fortress, Mönchsberg lift and WasserSpiegel Museum with one single ticket
from
72,00
€ for one 5 Treasure Ticket
Show offer
Related Articles
UNFORGETTABLE HIKING Pleasure ON THE SALZBURG ALPINE TRAIL
Learn more
Families on the Alpine Pasture
Learn more
Hosted huts with overnight accommodation
Learn more
Cycle Paths in SalzburgerLand
Learn more
Take the lift up the mountain
Learn more
Holiday in cool clear waters
Learn more
Fun-filled action for children
Learn more
Bad weather – here is what you can do!
Learn more
City of Salzburg
Learn more
190 Attractions – with one card
Learn more
Museums in SalzburgerLand
Learn more
Salzburg’s most famous artists
Learn more
High culture & theatre in Salzburg
Learn more
The alternative scene and concerts
Learn more
What is the Salzburg Festival?
Learn more
Salzburg Festival – transforming the city
Learn more
A short history of the Salzburg Festival
Learn more
How to prepare for the Salzburg Festival
Learn more
Salzburg Easter Festival
Learn more
Cuisine for children
Learn more
Holiday Destination Austria give feedback for a chance to win a special holiday experience!