Already several weeks before the opening of the festival, a special atmosphere captures the city. Especially in the old town you can feel that something is changing. And when the festival finally starts, it soon becomes clear what it is all about. World-class productions, illustrious guests and a general high-spirits accompany the festival every summer - the city becomes the "Stage of the World". 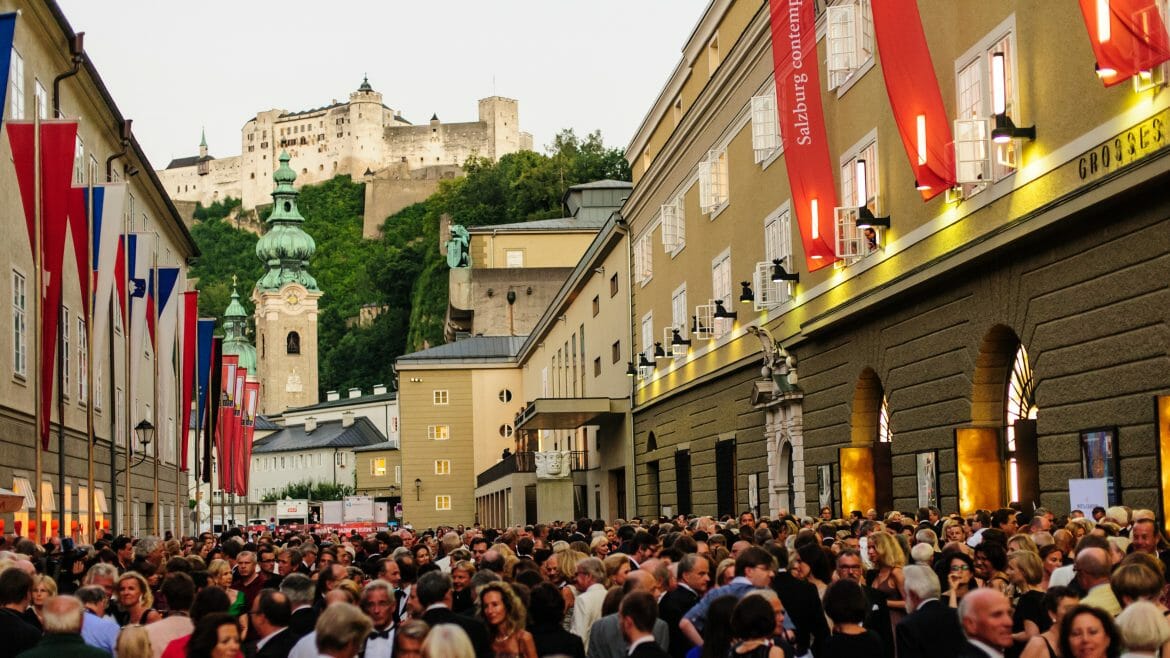 Selected locations of the Salzburg Festival

Large Festival Hall: The big challenge in the construction of the Large Festival Hall was to build a theatre house with an opera stage between the three hundred-year-old facade of the former Prince-Bishop’s Hofmarstalles and the Mönchsberg Mountain. The plans are primarily based on the work of the “Festival” architect Clemens Holzmeister. On the 26th July 1960, the Large Festival Hall was opened with a ceremony and a performance of Richard Strauss’s “The Knight of the Rose” under the musical direction of Herbert von Karajan. The almost square floor plan of the auditorium with approx. 35 metres length offers ideal acoustic and visual conditions for 2,179 visitors from the ground floor up to the circle.

The Felsenreitschule: This once served as a conglomerate quarry for the construction of the Salzburg Cathedral until, at the end of the 17th century Archbishop Johann Ernst Thun ordered its reassignment. He had 96 three-storey arcades smashed into the walls of the abandoned quarry in order to allow observing of equestrian demonstrations and animal fights from here. Early in the 20th century, Max Reinhardt suggested that the former winter riding school (now The Karl-Böhm-Saal) and the Felsenreitschule be transformed into a theatre. In 1926, he used the Felsenreitschule for the first time for a production as part of the Salzburg Festival.

House for Mozart: On the site of the former Great Winter Riding School, a temporary Festival Hall was opened in 1925, which over the decades has undergone numerous adaptations. The so-called “Little Festival Hall” was converted into the modern and attractive House for Mozart in three construction phases up to the Mozart year of 2006. It delivers optimal acoustics, great visibility and 1,580 seats with sufficient capacity and yet intimacy. Info: The Festival Halls can be visited daily as part of public tours (daily at 2 p.m.). Group tours are possible upon prior reservation.

Leopoldskron Palace: The “Cradle of the Salzburg Festival”. The idyllically located Leopoldskron Palace was built in the first half of the 18th century as the family seat of Archbishop Leopold Anton Firmian and is considered to be the “Cradle of the Salzburg Festival”. Here in 1920, together with Hugo von Hofmannsthal and Richard Strauss, Max Reinhardt founded the most important music and theatre festival in the world. For twenty years, this grandiose baroque complex served as a residence for the founder of the festival, although when he acquired it in April 1918, it was in a dilapidated state. Max Reinhardt renovated parts of the palace and brought it to life with his theatre productions and many friends and guests. Artists, musicians, writers and actors gathered in Salzburg to establish a new era. But soon, new political developments cast great shadows and in 1938 the castle was confiscated by the Nazi government, Max Reinhardt was dispossessed. He never returned to Leopoldskron. Since 1947, Leopoldskron Palace has been home to the “Salzburg Global Seminar” educational institution. In 1964, Hollywood used the romantic setting as the filming location for the world-famous film “The Sound of Music”. Special tip: Today, Leopoldskron Palace and the park are only accessible to guests of the “Hotel Schloss Leopoldskron” as well as conference and event participants. As part of “Zum Fest” the Salzburg Festival invites visitors to Leopoldskron Palace with “The World of Yesterday” (6th to 9th August 2020) on a very special journey through time into the important history of the building.

Crowds in the city

Summer is the peak tourist season. If you can, try and avoid the historic centre on very hot days. Or simply escape to the coffee houses in the cool passageways on Getreidegasse. It’s also not the best idea to visit the main sites and attractions in the city when the Festival is on as there are long waiting times and masses of people. It’s best to take public transport when coming into town but if you’re coming by car, allow for plenty of time to find a parking space.

Nevertheless, you have to experience the Salzburg Festival at least once. Be it at the live performances or simply the hustle and bustle while strolling through the city.