Festivals from August to October

In the middle of August, the 5th season starts in SalzburgerLand. It is the time to collect and process the harvest, a time of festivals, encounters and enjoyment. Here, you have the opportunity to get to know traditional peasant life with handicrafts, hikes, cooking classes, harvest festivals, Alpine cattle driving and traditional customs.

Since 1996, every year SalzburgerLand has been dominated by the Bauernherbst from the end of August to the beginning of November. The mountain herdsmen return to the villages after the Alpine summer with their artfully decorated cows, while for the farmers it is harvest time and slowly preparing for the winter. But it is also a time to celebrate together. At the end of August, the Bauernherbst is officially opened with a big party and this is followed bya lot of events characterised by peasant traditions, genuine customs and culinary enjoyment.

At the stalls in the farmers markets you can taste homemade farmers’ produce. There is cheese, in which you can taste the Alpine summer herbs, smoky bacon and sausages, crispy farmer’s bread, freshly harvested apples and pears and one or the other home-fired Schnapps.

After the everyday farming life working on the field and with the cattle, producing cheese, butter and bread, harvesting the fruit trees and cutting the last of the hay you can really feel the zest for life. Together with other guests you just want to relax and treat yourself by dancing, playing music, socialising and enjoying the food and drink. Lederhosen and Dirndl are proudly worn, and old craftsmanship is lovingly presented. Ornate hay figures are bound up and visitors can prove their craftsmanship while scything the grass, making wicker baskets or tile making. Special Bauernherbst holiday packages promise days full of activity while hiking or cycling, regional cuisine and a colourful supporting programme with a great atmosphere and genuine customs.

10 facts about the Salzburg Bauernherbst

Learn more
Learn more
Learn more
Learn more
Well-loved traditions, customs and craftsmanship are of great importance and have been cultivated in SalzburgerLand. For many guests a special highlight is the Almabtrieb, when cattle, with their elaborately decorated headdresses, are brought down to the valley from the high Alpine pastures. Creative figures made of hay can often be seen in villages at this time of year. Bauernherbst is a jolly time of year, with local groups offering entertainment such as dancing, singing and thigh-slapping along with other traditions that are still alive and well today.
Learn more
There is much work to be done during Bauernherbst in SalzburgerLand – freshly harvested produce is delivered to be sold at the farmers’ market.
Learn more
Bauernherbst is a time when regional and farm produce are especially enjoyed. There are numerous cookery classe where the farmer’s wives pass on recipes which have be handed down from generation to generation. Lungauer schnapssuppe, Flachgauer Bockbeidei, Pongauer Goaskasreindl, Pinzgauer Kasnockn and Tennengauer Almochsengulasch are all specialities that are served during Bauernherbst.
Learn more
Order in shop
Summer General 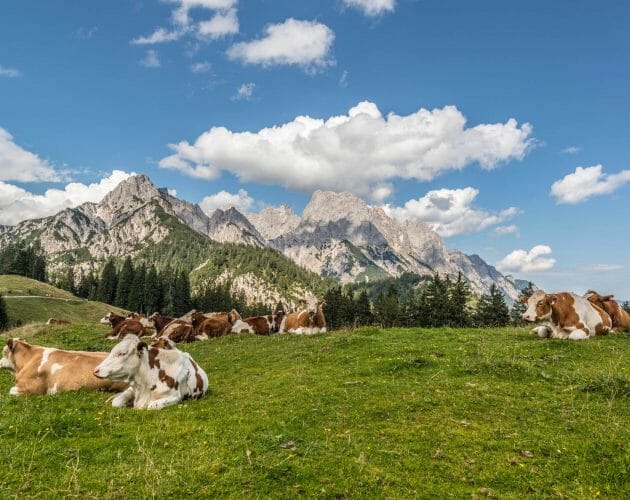 As soon as the cattle, horses, sheep and goats happily inhabit their lush green summer quarters after having been driven up to Salzburg’s alpine pastures for mountain grazing, numerous celebrations throughout the country mark the official start of “Alpine Summer”.

SalzburgerLand is considered a choice destination for mountaineers, hikers and bikers, families and nature lovers. They all appreciate the authentic ...

Many mountaineers live by the motto "I’ve got to make it to the top!” as the goal for each hike. But the next worthwhile goal after the summit victory already awaits in the mountain hut. Approximately 170 huts in SalzburgerLand have been selected as “Award Winning Alpine Summer Huts“. This ...

It is extremely important to have a reliable partner at your side in the mountains. Without partners, many summits would be out of reach – and sharing amazing moments ...