Since the year 1834, a longstanding traditional spectacle has been taking place in SalzburgerLand’s Lungau region — the Preber Shoot. Marksmen from all over Europe arrive at the shore of the mystical Preber mire and use their small-calibre rifles to shoot at targets at a distance of 120 metres. In doing so, they don’t aim for the targets directly, but instead for their reflections in the black water. With a bit of talent and some luck, the bullets enter the water just a little and then ricochet back at the target — ideally achieving a “Hexenblattl” shot. The traditional folk event is watched by an excited audience, which once even included a Walt Disney delegation in the 1950s.

“Walt Disney team takes a shot at Prebersee lake” read the title of an article about the traditional Preber Shoot event in Lungau by the Salzburger Nachrichten newspaper on 21 August 1957. It was quite the sensation that the “father of Mickey Mouse” had sent a delegation under the leadership of a certain Mr. Knapp to Austria in order to film the spectacular custom. The reason of the taping was supposedly an attempt at cracking the mystery of the Prebersee lake and to reconstruct it in the USA. The endeavour failed — the Prebersee lake has maintained its secret to this very day and the shooting only takes place here in SalzburgerLand’s Lungau region or at the Schattensee lake in Styria. The latter is only three kilometres away from the Prebersee lake and is said to be connected to it via an underground water channel. The waters of the two lakes appear to have the same composition and consistency — the swampy suspended particles deflect the projectiles, which prevents them from sinking and makes them ricochet instead as to — with a bit of luck — hit the targets on the shore.

Longstanding dedication with plenty of manpower

Nearly 170 to 200 marksmen participate at the annual Preber Shoot event toward the end of August — they arrive from various countries across Europe in order to test their skills against those of the locals. The Tamsweg-Prebersee association of marksmen counts 220 members, but only around 40 of them actively participate in the Preber Shoot. The marksmen (and women) aim at the upper part of the reflection in the water, around three metres away from the actual target. The association supervises the event and also introduces new marksmen to the sport. Even the rifles are provided on site. Large wooden beams or breakwaters are used to guarantee calm waters. But that alone does not necessarily guarantee success, as we will see.

Someone who is particularly well-versed concerning the Preber Shoot is Master Rifleman Heimo Waibl from Tamsweg. The trained marksman and hunter has taken aim at the water targets more than a thousand times — with small-calibre rifles and other historic sports rifles. He speaks from experience: “Without luck, nothing goes. 60 per cent of the time, the Preber Shoot is won by amateurs. If the sea level changes, for example due to rainfall, it immediately affects performance. Even when the pros come, it doesn’t mean very much.” It took Heimo Waibl forty years until he won a Preber Shoot himself.

Waibl’s grandfather and father were also Preber marksmen, and now even his own sons participate in the event — Waibl was eleven when he took his first aim and helped at the event.

During the great Preber Shoot, 24 diligent children are present at the six water targets and the six target disc stands to ensure that the event runs smoothly — in their function as “Zielerer” (“targeters”) they signal whether the marksmen hit their target or not and note down the results. And there is plenty of new blood. “Just a moment ago a boy stopped me on the street and asked me whether he will be allowed to participate next year again,” muses Heimo Waibl, who is very glad to see this much excitement in the younger generations. The kids themselves are fully involved and learn the Preber Shoot vocabulary quite quickly. After each shot, they have to return the target via hand — if no bullet hole is visible on the target, then the water swallowed up the bullet and a wave of the red sign is used to somewhat mockingly display either a “fish” or a “bus ticket”. In the case of a hit, however, the marksman is shown his entry position on the target. If the bullet strikes directly into the 7-centimetre diametre of the centre, then that’s called a “Blattl”. A tenner is called a “Hexenblattl” and is rewarded with one of the best sounds that can be heard at the Preber Shoot — a loud ring of the cowbell!

The Prebersee lake and its legendary mysteries

The trophy of the great Preber Shoot is an homage to one of the many tales that are told about the dark mire at a sea level of 1,514 metres — the winner receives a target imprinted with a redheaded witch riding her broom. The residents of Lungau say that the witch still comes to spit into the lake on full moon nights. The locals are also convinced that there are not only crayfish living on the bottom of the lake, but that a precious gold treasure can be found there as well. As idyllic as the lake may seem during the day with its luffing moss cushions, ruminating cows, swimming tourists and sun tanners, stone pines and larches, it becomes rather mystical at dawn — for example, when the morning fog glides across the dark water and the mosquitos dance around the last rays of the sun. 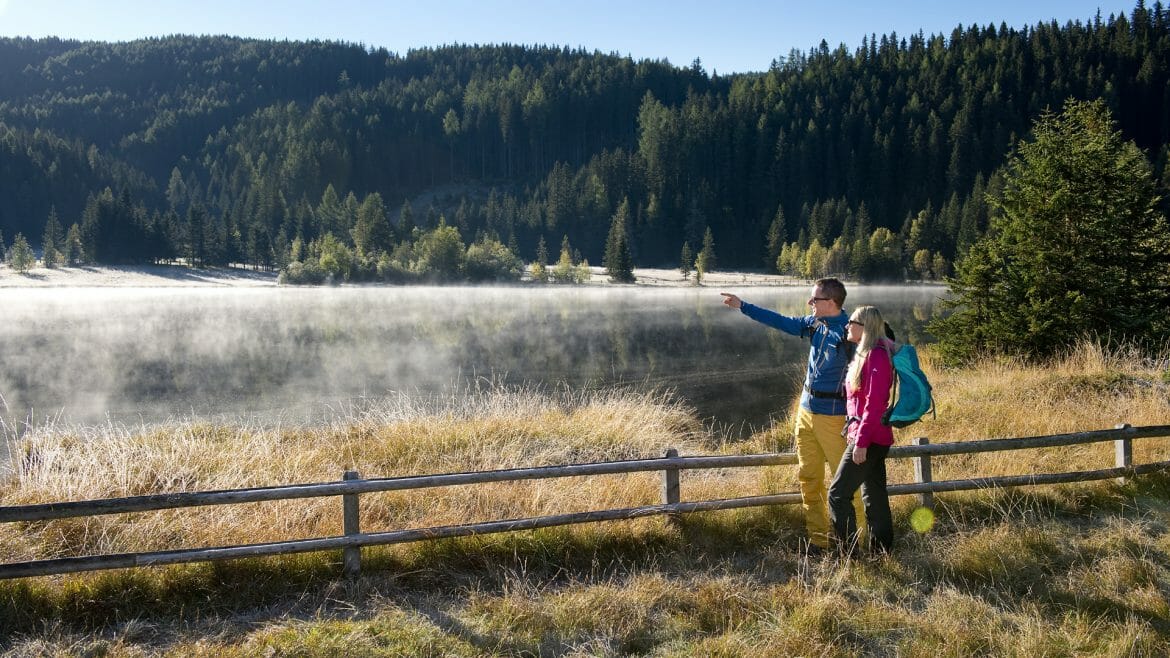 From coincidence to popular tradition

The mystery of water target shooting, however, can be explained by physics and by studying the soft, dark and oxygen-poor water. According to legend, it was hunters that had first discovered the phenomenon, says Heimo Waibl. “The hunters were sitting at the lakeshore when a deer suddenly emerged from the bushes. One of them accidentally shot at the reflection of the deer, which was first met with ridicule. But then the deer suddenly collapsed and the hunter had the last laugh.” Today, deer are no longer collapsing and aim is taken at the reflections on purpose. When the bullets strike, the water splashes, music plays and the crowd cheers, you know that the Preber Shoot is well under way. The crayfish are left cold by all of this. The witch does whatever she wants anyway. And the marksmen rejoice and cheer, provided that their practice paid off.