On pilgrim paths through SalzburgerLand

Walking over the Falkenstein at Lake Wolfgang

In the middle ages, St. Wolfgang was one of the most important places of pilgrimage in Europe. Even today, you can hang up your thoughts on the ancient path over the Falkenstein. Against the backdrop of the Salzkammergut, a hike here can quickly become a pilgrimage, together with the wishing bells and healing water.

A flamingo and a unicorn hustle in the crystal clear water of Lake Wolfgang. Children splash enthusiastically with the cool water and the easiness of a big holiday is in the air. The watery blue sky curves across the 1,521 metre high Zwölferhorn on the opposite shore of the lake, making it a summer’s day picture postcard. This could be a beautiful day on the lake. But there are other plans!

On the move as pilgrims

We want to separate ourselves from the outside world for a few hours, to step by step turn one’s view inside. This endeavour is called a pilgrimage. Or pilgrimaging, as made popular by comedian Hape Kerkeling. But there is a difference between the pilgrims and the pilgrimage. A pilgrimage is a purely Catholic tradition, always takes place in a group and leads to a designated place of pilgrimage. Pilgrimaging, however, can be done by anyone, regardless of the denomination and in all possible places that are important to them.

On this hike today, it’s all about pausing, pondering and thinking about life. The question of the meaning of life hangs in the air in a serene, easy way. In the slowness of action lies the secret of doing. One does not drive with the car, and one does not sail with the ship. One goes at the same pace as the thousands of other pilgrims who came close to St. Wolfgang approached with its pilgrimage church.

Walking over the Falkenstein

From the Fürberg district in St. Gilgen, we leave the terrain of flamingos, unicorns and families bathing in Lake Wolfgang and head out into the cool shade of the trees and rocks. The path leads steeply uphill, covered by pilgrims since the middle ages. Back then; this place was regarded as one of the most important places of pilgrimage in Europe. His Holiness, Wolfgang, Bishop of Regensburg, not only gave the lake his name.

He also left his mark on the Falkenstein – in a rock niche, in which you can still slip into today, he is supposed to have lived for three years as a hermit. The small Falkenstein church, with its wishing bell, was later built at this place. Of course it has to be rung – if you pull on the rope and the bell is heard exactly three times, then a wish will be fulfilled in the near future. 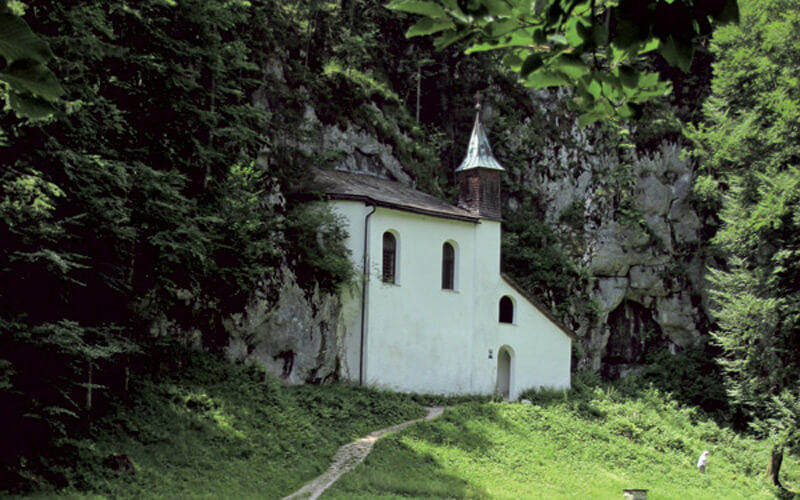 Just a few steps from the chapel, the Wolfgangi Spring invites you to either wash your eyes or take a small sip of the healing water. Whoever wants to play it safe, refills their water bottle at the same time. After all, the Wolfgang Miracle Book from 1753 mentions the Falkensteiner water as an effective means against curses.

Gschmå Places at the Lake Wolfgang

There are several Gschmå Places on the Falkenstein, as these places of comfort are affectionately known by the locals. There, you will find benches and relaxing chairs, along with all of them having terrific views. But for us, we must continue as, after all, the tour takes over three hours to St. Wolfgang. While the trail leads down near the lake to the world famous town, one’s thoughts wander far and wide. One’s spirit comes to rest and the beautiful nature becomes the projection screen. Scientists have proved what hikers and pilgrims have long known – that movement in nature helps regenerate areas of the brain that are responsible for the concentration.

And so we arrive with clear views and an equally clear head in St. Wolfgang, this town full of clichés and beauty. Two true masters of their art equipped the famous pilgrimage church with incomparably beautiful altars. Not far away, Peter Alexander played the Head Waiter, Leopold and sang the “Weisses Rössl” on Lake Wolfgang in the same-named film.

There are Flamingos here, too. And unicorns! They almost seem to belong to another world. A beautiful and diverse world. A world one is happy to leave for a couple of hours and also where one is happy to return to again.

Tips for quiet moments at special places of power:

In SalzburgerLand, there are numerous pilgrimage churches such in the Silent Night towns of Oberndorf (Maria Bühel), Arnsdorf (Maria im Mösl), City of Salzburg (Basilica of Maria Plain), Hallein (Maria Dürrnberg) or Mariapfarr (our Lady). Additionally, the pilgrimage churches of Maria Kirchenthal in St. Martin near Lofer, the Filzmoos Pilgrimage Church or “Our Lady” in Großgmain are especially beautiful. The famous “Pinzgau Pilgrimage” from Ferleiten (Fusch on the Großglockner road) across the Großglockner High Alpine road up to Heiligenblut in Carinthia takes place every 28th June.

On 25th August, 2018 pilgrims meet for the “Almer Pilgrimage” in Maria Alm, to hike over the Steinere Meer Mountains towards St. Bartholomä on Lake Königssee.

So-called “Augenbründl” (eye fountains), whose waters have a healing effect on eye diseases, can be found at the pilgrimage churches of Maria Brunneck at the Pass Lueg (Golling) and St. Leonhard (Tamsweg).