A walking paradise for the whole family

Children love playing, romping about in the great outdoors and pursuing their spirit of adventure. They take such enjoyment from examining stones, jumping over streams, doing a balancing act over fallen-down trees and observing strange animals. No wonder, then, that gentle mountain tours and hikes very quickly become the high point of every family holiday in SalzburgerLand. When walking in this area of outstanding natural beauty, it’s not all about conquering mountains, covering great distances or mastering the most difficult mountain passes. It’s about taking advantage of all the natural offerings and by doing so the mountain is transformed into a huge adventure playground. All over SalzburgerLand there are wonderful hiking paths and routes which are specifically designed for children and all of which help to guarantee you the very best holiday.

The circular path with many play- and puzzle stations begins at the Hotel Waldgasthof by the middle station Star Jet and takes around 1.5-2 hours. There’s a fairy-tale world, a bird-nest swing, skywalk and much more for daring adventurers. At the end a small surprise lies in store for all who successfully complete the puzzles!

Fantastic learning stations are just waiting to be discovered, and the kids can play their hearts out in the swing forest, jungle gym and on the giant slide.

Here it’s all about discovering and experiencing water. Equipped with a treasure map, kids will make their way to the Gasthof Schlögelberger to receive their reward.

In this ravine in the Salzburg lake District exists one of the last fee mills (you could pay to grind there yourself), as well as a refurbished brechel bath (a dry sauna). Along the paths there are lots of interesting things for children to discover and experience.

Family trekking at its very best. This hut-to hut walk lasts for about three days along paths which offer up breath-taking panoramas at an altitude of between 1,300 m – 2,200 m. Kids will have no problem managing the routes, which are about 2-5 hours per day. In between walking there’s more than enough time to let off steam, look for berries and play in this Alpine paradise.

In the area around Schafbach lives an enchanted dwarf, whose story is recounted along ten wooden boards along the path. After around an hour of walking time you’ll be on the Schafbachalm where you can have a well-earned rest and refuel. Other walking paths in around around Faistenau include the enigmatic “Bear Path”, the “Forest Magic Path” and the mental agility and information nature trail by the Hintersee Lake. 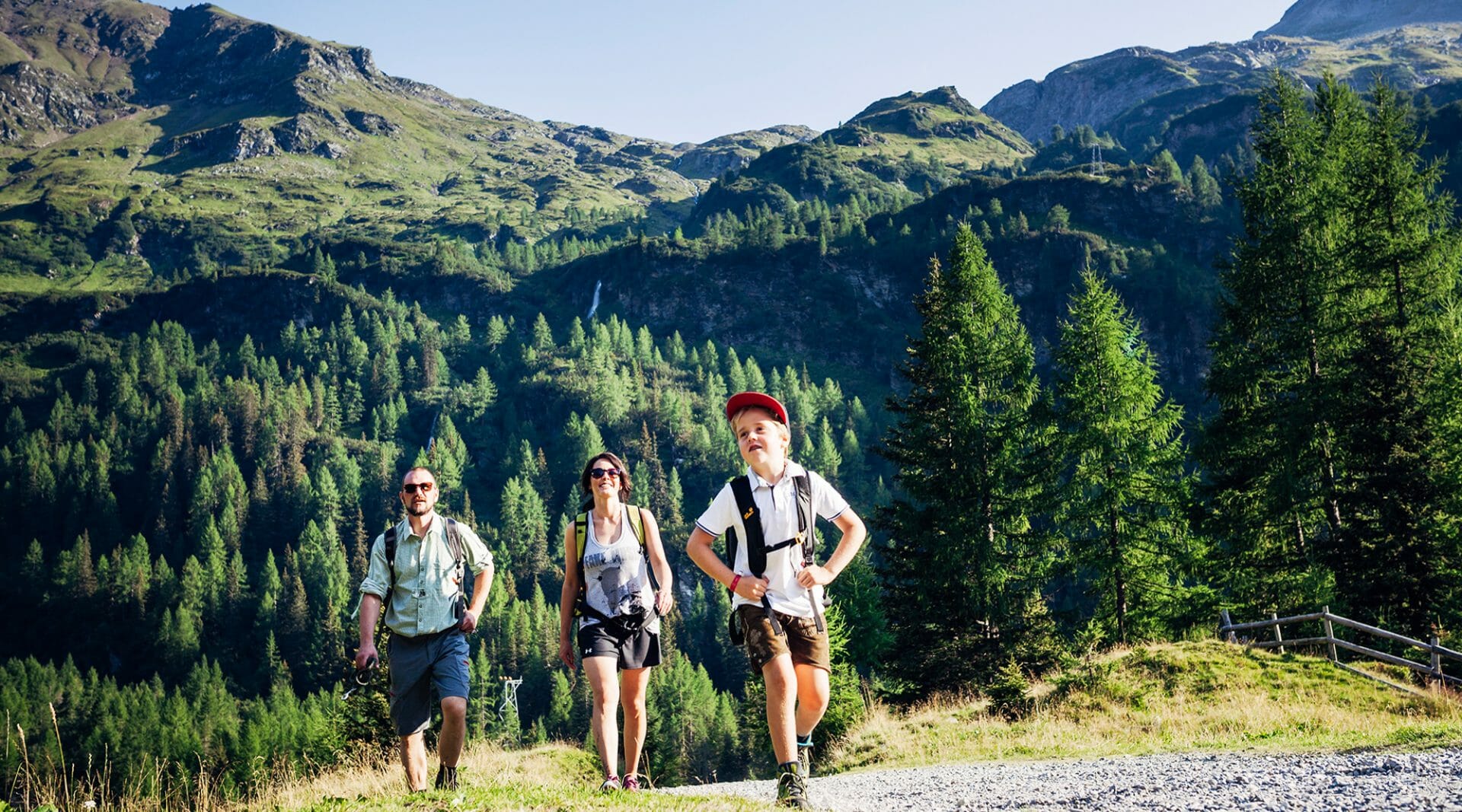 Starting in front of the mountain station at Asitz, this path leads down through the Asitzmulde on to the Sonnenkogel and eventually over the Asitz and back to its starting point. You’ll be on foot for around two hours, whilst the children enjoy play stations like a slide, a zip line and much more.

Unbridled adventure awaits on both these paths. At the Expedition Kodok kids set out on the hunt for magical crystals that cunning Kobold has hidden on the Reiteralm. At the play stations dotted around between the mountain and middle stations of the Kohlmais cable car you’ll hear many stories of the tragi-comic history of Montelino the clown.

Even if you wouldn’t suspect it, there are genuine virgin forests in the Salzburg Alps. One of these, and a particularly beautiful one at that, is in Rauristal, in the middle of the Hohe Tauern National Park at the Kolm Saigurn valley head. Along the education pathways through the forest there are many fascinating things to discover and the hut landlords will also tell you many fascinating local legends from the region.

30 stations at over 1,700 m above sea level await accompanied children. The Bienenweg “bee path” is of particular interest.

Up on the Schmittenhöhe mountain above Zell am See Schmidolin, the Schmitten mountain’s dragon, ensures that there’s never a dull moment on the mountain. On the way there are increasingly tricky puzzles to solve, daring feats of courage to pass and tasks to complete. The aim is to help Schmidolin learn how to breathe fire.

The figures which are presented every year at the beginning of the Salzburg Autumn Festival find their new home on the HeuART-path in Annaberg. Legendary figures, tractors, animals and buildings are just a few of the impressive statues that you can come and marvel at all year round.

Little ones will find out all about the extensive world of herbs on this fantastic hiking path. An added extra is the impressive panoramic views over Hochkönig.

Here you will walk on one of the most beautiful Alps in Salzburg through thick forests, over soft meadows and along craggy rock faces. Particular highlights for children are the wonderful waterfalls and the invigorating swimming pond. Also highly recommended are the history trail in Unken, the heritage path in Weissbach and the Vorderkaser Gorge in St. Martin near Lofer.