Seven towns located in stunning landscapes, gentle grass hills, and imposing mountain ranges. For those who want to be active during their holidays, the Salzburger Sportwelt is just the right address. Whether on a light enjoyable hike or an ambitious high-altitude tour, with the family, as a couple, or simply alone, the Salzburger Sportwelt offers an individual holiday experience for all.

Seven towns located in stunning landscapes, gentle grass hills, and imposing mountain ranges. For those who want to be active during their holidays, the Salzburger Sportwelt is just the right address. Whether skiing, cross-country skiing or sledging, with family, as a couple or all by yourself - the Salzburg Sport World offers an individual holiday experience for everyone.

The seven holiday towns in the Salzburger Sportwelt are the perfect starting point for your active summer or winter holidays in Austria. These villages lie surrounded by imposing mountains in the heart of SalzburgerLand:

Summer pleasure in the Salzburger Sportwelt

When the day begins with a rich breakfast made with ingredients from the region and a great deal of love. When an early morning hike to the summit draws you from afar. When breathing becomes easy once again – in this mountain air! Then, guests know why holidays in the Salzburger Sportwelt are so good for you.

For families with little adventurers. For mountain enthusiasts that just can’t get enough of the Alpine summer. For cyclists, mountain bikers, and E-bikers. For all those who want to bring both body and mind back in line.

The Stoneman Taurista stretches out over 123 kilometres and takes you past glittering mountain lakes, lush Alpine meadows, rustic mountain huts and SalzburgerLand’s summit crosses. With 4,500 metres of altitude gain and 360° Alps, the Stoneman Taurista is Roland Stauder’s exclusive mountain bike experience in Austria.

the “Salzburger Summit game” – LISTEN TO WHAT THE MOUNTAINS HAVE TO SAY!

The “Salzburger Summit Game” turns mountain hiking into a playful encounter with nature. The challenge in each of the seven holiday areas of the Salzburger Sportwelt is to scale a beautiful mountain peak and literally hike its history. Hikers can pick up a hiking brochure from the local tourist offices and collect stamps for it on all the peaks. Individually developed rituals invite you to linger on the mountains, recharge your batteries, and replenish yourself and connect with each special place. The “Salzburger Gipfelspiel” encourages hiking, but also mindful listening and pausing. This game of the imagination is sparked by the beauty of a spectacular landscape.

The skis are freshly waxed. The snow crunches under the boards. The sun makes the surrounding world, covered by fine snow, shine. The slopes lie ready. This is how freedom feels! Brilliant snow parks, such as the Better Park or the Absolut Park, are also known far beyond the country’s borders. Here freeskiers and snowboarders get their daily dose of adrenaline. For those who want to learn from the pros, there are individual courses. In the Salzburger Sportwelt Ski Amadé 25 ski-schools await the little ski stars of tomorrow. While the parents enjoy the slopes together again, the offspring learn the basics of winter sports in a playful way.

Pure zest for life is waiting on a stop in the ski lodge. So much pleasure at this height! The magnificent ingredients from the region are served with a big portion of hospitality.

The new “Panorama Link” cable car is the realisation of a long-held ambition. Stretching out over more than 3 kilometres, the cable car connects the ski areas of Flachau, Wagrain, St. Johann, Kleinarl, Flachauwinkl, and Zauchensee. Winter sports enthusiasts benefit from 210 contiguous kilometres of slopes. A new ski circuit has also been created with the opening of the new cable car. The “12 Peaks Trophy” experience is 91.5 kilometres in length and guarantees 10,000 vertical metres of downhill fun through five valleys. All mountain peaks lie at around 2,000 metres in altitude. Anybody completing the tour in one day receives a black trophy as a memento; there’s a red trophy for two days and a blue trophy for three or more days. 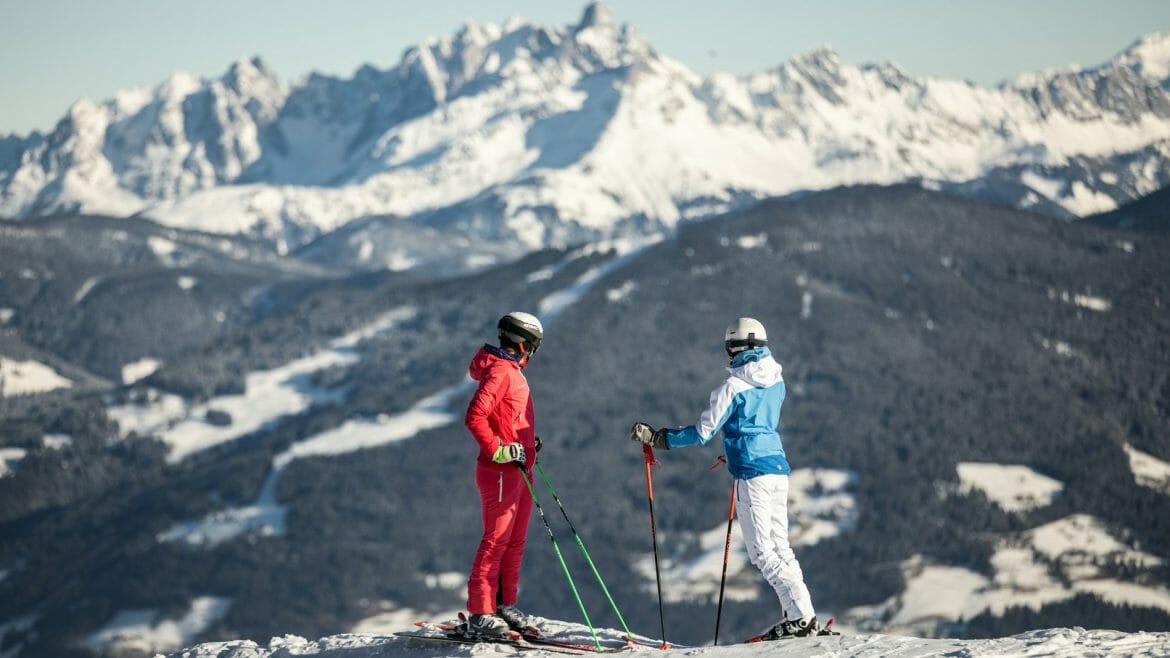 Winter in the Salzburger Sportwelt
Load video
You can activate the display of this element via the button. By activating the integration, the browser exchanges data with the respective providers. The current page has no access or influence on the content, type, storage and processing of this data. By clicking on the button, you allow the cookie agreedtoyoutube, you can revoke this cookie under the privacy settings.
Tue, 31.01.2023
increasing
-4 ° C
° F

What would Salzburg be without its delights? Throughout the year, wonderful dishes are waiting to be savoured in all regions and, it goes without saying, in the City of Salzburg too. These exceptional Salzburg specialities are simply part of life. Traditional recipes can be found to this day at the dinner table– whether it is at home, at an inn, a mountain hut or in an award-winning restaurant. A little journey with delectable recipes…

Whether fish or meat, sweets or cheese creations, the SalzburgerLand is famous for its delicious delights far beyond the national borders. If the host is ...

No day of skiing would be complete without the magic of a mountain hut. A stop-off for refreshments on the Culinary Pathway for Hut Lovers leads to experienced hut proprietors and “award-winning ski chefs” along the ski slopes in SalzburgerLand. You’ll be surprised by these innovative hosts with ...

Without water there is no life – and also no beer and absolutely no schnapps! The high art of brewing beer is held in high regard in Salzburg, and the passion for the ...

For many years SalzburgerLand﻿ has had the highest concentration of award﻿-winning restaurants﻿ in Austria﻿ – it is rightfully designated as the “province﻿ of top ...