Go deep down inside the mountains: caves and show mines

The raw materials which once made SalzburgerLand great now lie dormant, deep in the earth. These raw materials ranged from “white gold” – salt – to copper and ore. The galleries which have remained in the mountain and can be explored are impressive to this day. Children and adults alike love this adventure. When do you even have the opportunity to be hundreds of metres underground?

The exhibition galleries and mines in SalzburgerLand are also a particularly good excursion destination during adverse weather.

Anyone who wants to understand Salzburg has to understand salt. The bishops and archbishops of Salzburg attained wealth through this resource, and were able to safeguard Salzburg’s political power and cultural supremacy over the course of centuries. But salt has already been mined for a much longer period in Hallein: the Celts used the “white gold” as early as 2,500 years ago in order to preserve foodstuffs. The tour of the world’s oldest show mine in Dürrnberg works its way along from highlight to highlight while featuring giant miner’s slides, rapid trips with a miner’s railway, enormous salt formations and the ride over the salt lake.

Cast a glance at the opening hours of this mine in SalzburgerLand.

Eisriesenwelt (World of the Ice Giants) in Werfen

The discoverers of the cave were quite astonished when they realised that they had just discovered the world’s largest ice cave system. And even today it takes our breath away as visitors when we are confronted with the gigantic and never-melting ice formations. Not far from Hohenwerfen Castle you can get into a cable car or hike by foot up to the entrance of the coincidentally discovered cave. The tour lasts about 75 minutes and is offered from May to October (depending on temperatures). 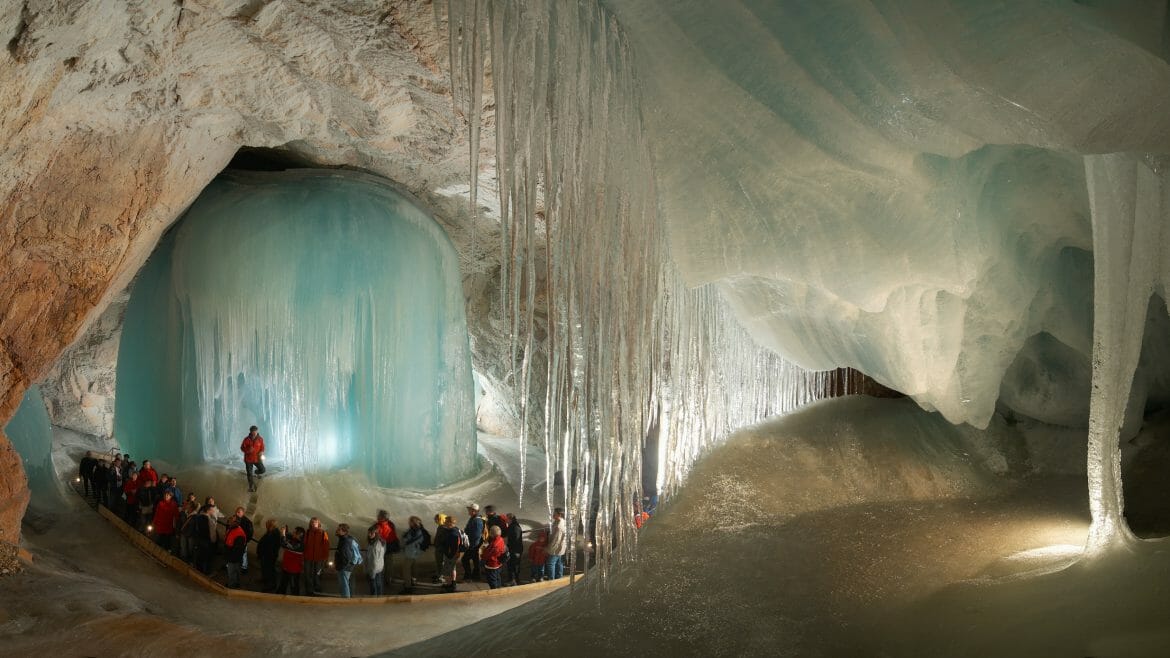 Ore was already mined over 600 years ago in Hüttau near Bischofshofen. The impressive galleries from which the raw material for tools and weapons came also house other materials, and provide deep insights into life and work a long time ago. Unfortunately, children under 4 years of age may not enter the galleries.

Guided tours are offered daily from May to September. Advance reservation is requested in the other months.

Everything appears very rustic and cosy in the “Knappenstube” (miner’s room). It is the starting point for going down into the galleries and the huge tunnel system of the oldest mine in the province. But appearance is deceptive. As pleasurable as a visit to a mine is nowadays, in former times it was so strenuous to work in poor light, great heat and stuffy air. You can go underground for about one hour under expert guidance. The Leogang show mine is open from May until the end of October, although it remains closed on Mondays.

As part of the UNESCO Geopark Network Ore of the Alps, the mining museum is accommodated in the Knappenheim Cultural Centre in Mühlbach am Hochkönig. This first-class museum covers all facets of mining which have been conducted here for more than 4,000 years. After that it is time to go down into the exhibition galleries, which is a real experience featuring a blasting simulation and detonation station. The museum is open around the Christmas holiday period as well as from May to October.

Other mines and caves in SalzburgerLand

Incidentally: how many caves are located in the mountains in and around SalzburgerLand will probably remain a secret forever. When cave explorers had to be rescued from the Riesending (huge thing) cave inside the Untersberg massif in 2014, for the first time it became clear to the general public that the shafts and tunnels which came into being naturally constitute a huge cave system that emanates a tremendous amount of fascination. Become acquainted with some of these caves and mines, and go deep down inside the rock.