The Best Mountain Artists on their bikes

Thorsten and Marius from the Best Mountain Artists haven’t finished with Saalfelden-Leogang. Their first visit was on two legs, whereas this time they were in the (electric) saddles and explored the area on two wheels.

For the outdoor bloggers of the Best Mountain Artists, there is no sporting challenge that they would not accept. And just as sports and action belong to Saalfelden-Leogang, as do the mountains, the first stop of the day for the bloggers was the bike school Elements Outdoor Sports at the Asitz Valley Station. The goal for today? Biking to the Riedlalm on the Leogang Sonnberg with the E-Mountain Bike.

In the bike school, the bloggers meet their bike guide Claudia, who leads them through the tour and has a few tips for cycling on an E-Mountain Bike. It is the first time on an electric mountain bike for Thorsten and Marius. In the introduction, they learn the most important technical terms. These are important especially for beginners, to understand how the bikes handle. Light-weight ones without damping or suspension are called “Hardtails”. These are cheaper, but due to their rigid frames not really ideal for this terrain. It has been noted. Then there’s the “Fully”, which is more expensive and heavier, but it has a suspension and generally ensures greater riding pleasure. Basic knowledge: check. We can get started. 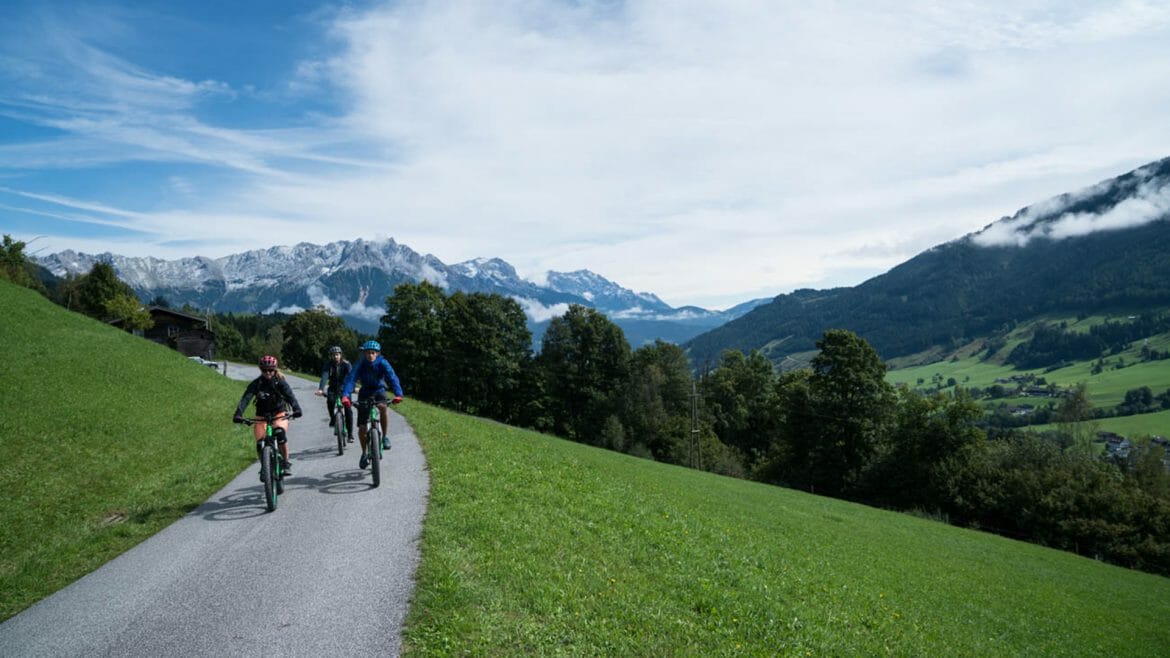 Thorsten and Marius rented the E-Mountain Bikes and the related equipment at Sport Mitterer in Leogang. Renting is generally a good idea, if you want to just casually try out the sport. For these two, it was then time to head into the terrain and towards Riedlalm on the Leogang Sonnberg. Initially, the E-Mountain Biking was somewhat unusual for the sports bloggers:

Usually I ride without a motor, but with the E-Mountain Bike we came up the mountain pretty quickly. Even steep passages that are normally an absolute feat of strength were easy-peasy.- Marius

But not only on the uphill, the E-Mountain Bike is perfect for turns and small jumps. However, the highlights are the green meadows, majestic peaks and easy trails on which Thorsten and Marius could fully focus during the ascent, as the strenuous part of pedalling was for the most part taken on by the bike.

The cyclists are on a forest road for about an hour, until they reach the quaint Riedlalm 1,200 metres above sea level after many hairpin bends and fantastic views.

So, for me E-Mountain Biking was pretty cool, since we could go full throttle downhill and thanks to the motor also uphill, which suited me very nicely. – Thorsten

Thorsten and Marius brilliantly master the “peak cycling” and sitting on the cosy sun terrace of the Alm indulge in a ‘Gipfelradler’ drink of the same name, as you might have guessed. Socks off, legs up and enjoy the sunshine. The break from cycling does them good. Strengthened by food and drink, the bloggers swing again up onto the E-Mountain Bikes. The way back is via the Gunzi Trail, a forest trail, which is lovingly named by the locals after the Gunzenreit farm. 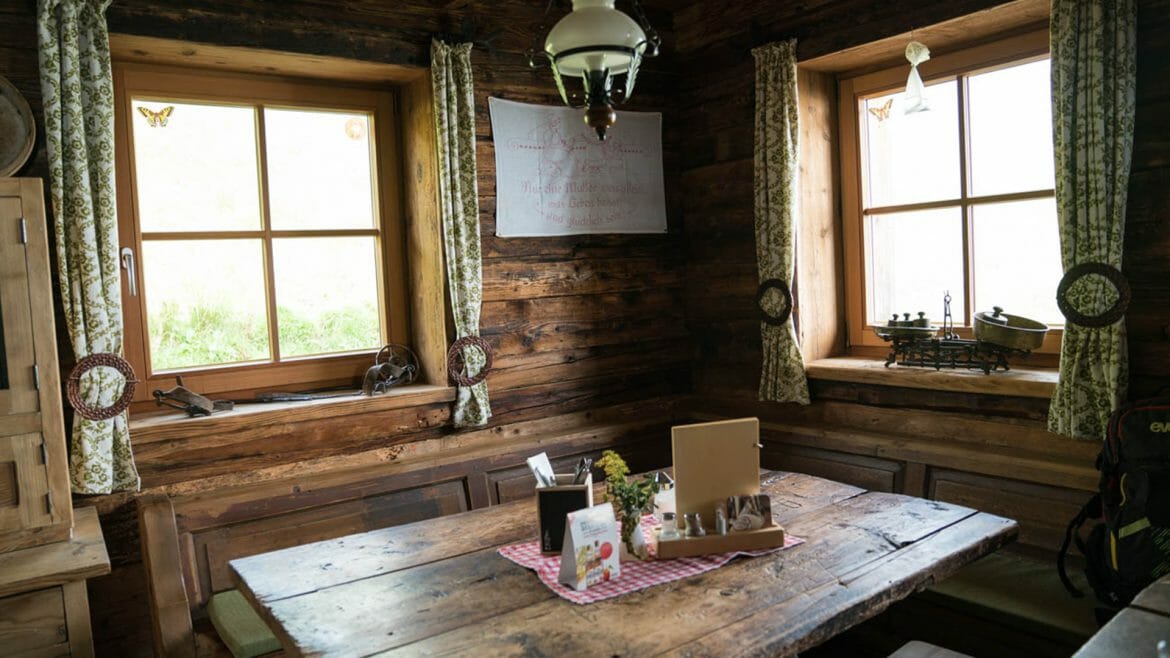 In addition to the numerous bike routes in the region, the Leogang Bike Park is also a paradise for all Downhillers, Freeriders and Mountain Bikers. Nine different tracks invite you to practice, jump and have fun. Those who want to initially play it safe can hire a guide who always has the right tips and tricks up their sleeves. And anyone looking for a real challenge can ride the demanding World Cup courses.

There are beautiful tours with beautiful trails in Saalfelden-Leogang and there is of course the huge Bike Park, which has World Cup sections and is probably one of the best in Europe. – Marius 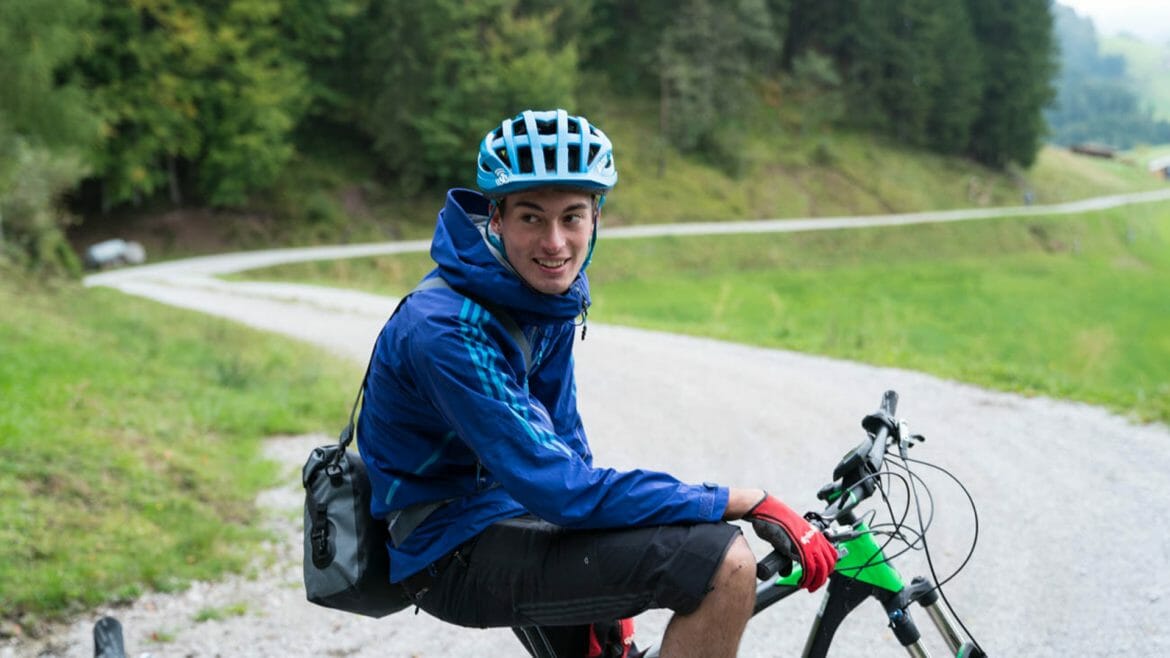