The message of peace from Austria to the world!

Gentle tunes and soothing words that touch the soul: The magic of “Silent Night” has remained uninterrupted for more than 200 years. A song that promises consolation and gives hope. Over and over again.

For centuries, the song has crossed borders and overcome crises. It connects people no matter their origin, age or religion, and provides a link back to the time during which it was created. Over 200 years ago, Joseph Mohr, a priest from Salzburg, and Franz Xaver Gruber, a teacher from Upper Austria, sang the song for the very first time at the St. Nikola Church in Oberndorf near Salzburg. The original poem was authored by Joseph Mohr, whereas Franz Xaver Gruber added the melody on his request. Only a few years later, singing families from the Zillertal valley carried the song from Austria into Europe and the rest of the world. Today, the song is performed in over 300 languages and dialects.

On the traces of “Silent Night”

The many Silent Night locations in SalzburgerLand, Upper Austria and Tirol invite you to follow the traces of the world-famous Christmas song: 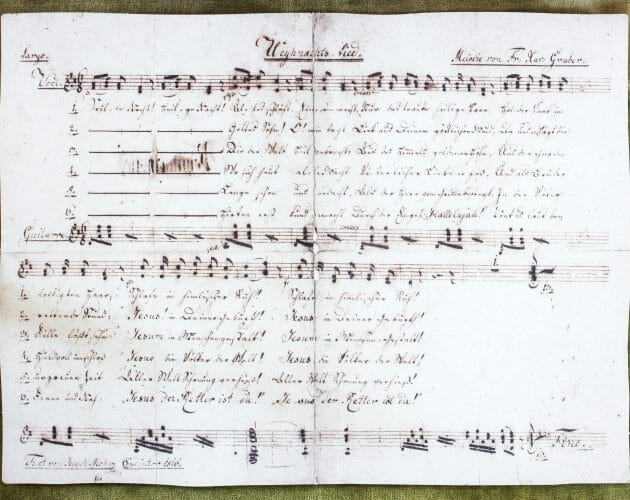 Learn more
Learn more
When the days are particularly short and the nights are particularly dark, the magic of Christmas lies in the air. This time of year belongs to traditional customs, recipes and contemplative events.
Learn more
Together, we did our utmost to pay homage to the creators and distributors of the famous Christmas song.
Learn more
Free press texts, photos and videos as well as the direct contact to our press team.
Learn more
Advent tales and customs of SalzburgerLand

Towards the end of November, Salzburg enters a period of reflection. The days become shorter and the first snowflakes of winter start to fall. The well-known customs such as the traditional Krampus Run, Advent wreath making and burning of Weihrauch are all part of Christmas rituals, but there are other contemplative customs which are still very much cherished such as the Frautragen, Kripperlschaun.

Thousands of twinkling fairy lights provide a magical glow during Advent in SalzburgerLand. From the end of November, the Christmas markets allure and ...

Learn more
The long tradition of the Christmas Markets

The lovingly adorned market stands envelope the festively decorated Christmas tree. Chestnuts roast on an open fire and the air is swirling with aromas of orange punch, cinnamon and glühwein as children, with eyes full of wonder gaze upon the nativity scene and an angel in white accompanies St. ...

A visit to one of the many atmospheric Christmas markets in SalzburgerLand is like dipping into a Christmas wonderland and awakens often long-forgotten childhood ...

The baking that takes place before Christmas in SalzburgerLand is as much a tradition as picking out a Christmas tree, a visit to a Christmas market and the presents. ...