A new song is created during difficult times

War, natural catastrophes, hunger, misery, poverty and epidemics: “Silent Night” is created during difficult times. The song’s creators, Joseph Mohr and Franz Xaver Gruber, also grow up in an environment absolutely unsuitable for children or adolescents: French troops, occupations and violent crimes are part of everyday life. Their parents struggle to let their children out of the house or even feed them. And a devastating political and economic landscape offers little to no future. Evaluating their circumstances, hopelessness overcomes the people. Those with strong faith in God can fall back on something. The rest becomes desperate, losing trust and confidence in a better future. Perhaps it is exactly this traumatic environment that makes people so receptive to a new song about home. Like a light during a dark night, it gives off a spark of hope and warmth.

18/10/1813, Ried im Innkreis: As a result of the “Treaty of Ried”, the Kingdom of Bavaria switches sides to the anti-Napoleonic allies.

18/09/1814 – 09/06/1815: Following the defeat of Napoleon in 1814, the Congress of Vienna facilitates the reorganisation of Europe. Salzburg, Tirol and Upper Austria are also affected. After years of war, the people suffer greatly and yearn for peace.

April 1815, Indonesia: The Tambora volcano erupts on the island of Sumbawa. A natural catastrophe with global consequences, including effects on Bavaria and Austria. As a result of the cold spring months of 1816, the region experiences substantial crop failures and famines. Epidemics spread, people die and Europe experiences one of the first major emigration waves.

18/06/1815, Waterloo (Belgium): Napoleon returns from his exile on Elba and to power for only one hundred days: The Battle of Waterloo leads to his final defeat.

14/04/1816, Munich: The “Treaty of Munich” triggers the end of tensions between the Kingdom of Bavaria and the Austrian Empire. However, it also results in significant territorial losses on both sides: Bavaria hands the Innviertel and Hausruckviertel regions, as well as Vils in Tirol, back to Austria. The areas of the former Berchtesgaden Provostry and the Rupertiwinkel region, on the other hand, remain with Bavaria: This hit Salzburg especially hard. Among other things, it leads to the separation of the affluent maritime town of Laufen: Laufen and its entire administration stay Bavarian, whereas Oberndorf on the outskirts joins Austria. On 1 May 1816, the Bavarian seal at the archiepiscopal residence in Salzburg is replaced with the Austrian double-headed eagle: After years of changing rulers, Salzburg is no longer part of the Kingdom of Bavaria.

1816, Mariapfarr: Joseph Mohr, a young assistant priest from Salzburg, composes a poem with six stanzas in Mariapfarr. Its title is “Silent Night”.

24/12/1818, Oberndorf: Joseph Mohr — now an assistant priest in Oberndorf — hands the poem over to his friend Franz Xaver Gruber. Gruber is a teacher in the neighbouring Arnsdorf as well as an organist in Oberndorf. There, the Napoleonic Wars and the new borders divisions have had devastating effects: The people are deeply in debt, do not have any sources of income and suffer from hunger.

Joseph Mohr asks Franz Xaver Gruber to add a melody to the poem. At first, Gruber considers the D major composition a pièce d’occasion and doesn’t attach much significance to it. That same evening, the song is performed for the first time towards the end of the Christmas mass: The melody is composed with two singing voices and guitar accompaniment in mind.

Joseph Mohr has left behind a hand-written autograph of the song, Franz Xaver Gruber even four. The autographs are exhibited at the Salzburg Museum in the city of Salzburg as well as at the Silent Night Museum in Hallein. 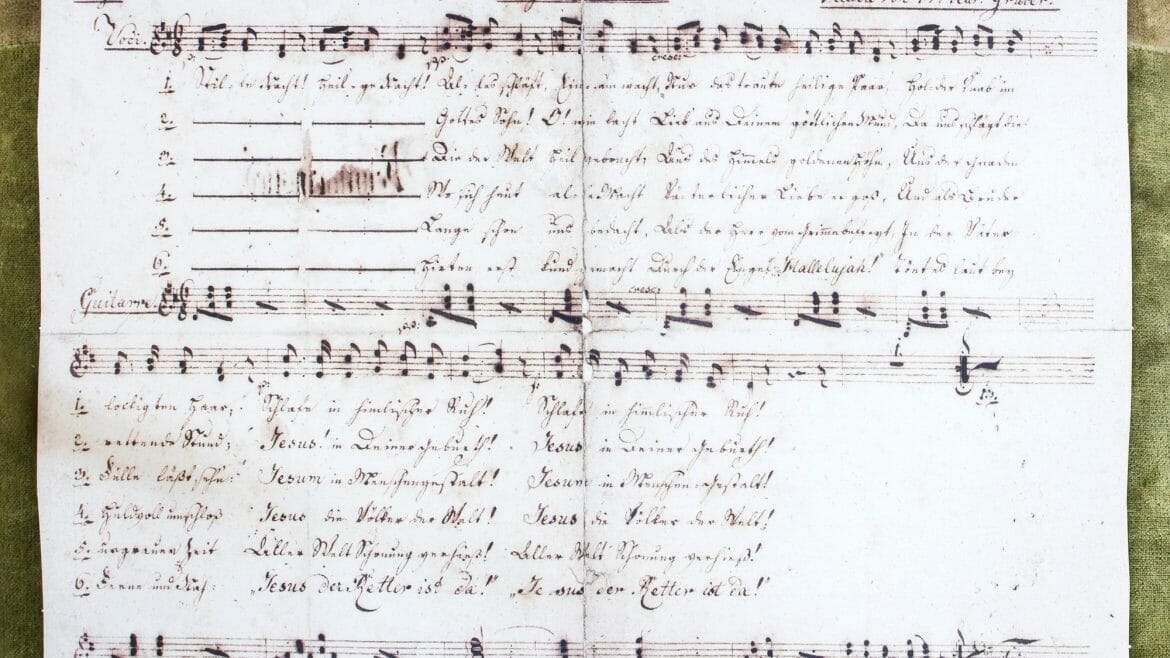