In SalzburgerLand, the nearest source of water is just around the corner. Next to countless lakes, streams and swimming pools, nature has managed to stage the precious element in a number of beautiful and impressive ways. From time to time, locals would help along a little, creating sights lasting for generations, such as the trick fountains in Hellbrunn or the Alm-kanal. Whether a Zille boat ride on the Fuschlsee lake or a visit to the big-gest water-bearing cave passage in the world: these trip destinations in SalzburgerLand will undoubtedly exceed expectations and create “still” as well as “sparkling” moments of pleasure.

Geographically, the Fuschlsee lake is part of Salzkammergut and is one of the most beautiful lakes in SalzburgerLand. Embedded in between meadows and forests, surrounded by summits perfectly suitable for hiking and with the “Sissi” castle right by its shore, it is considered the definition of the “Sommerfrische” summer retreat. The Fuschlsee lake can be walked around in approximately three hours and a half, but a ride with the “Fuschlerin” is even better. Up to twenty people can join the small Zille boat with sunroof. The quiet and super romantic ride takes around 40 minutes. Docking occurs at the Seepromenade in Fuschl as well as at the Schlossräucherei on shore right across. Here, we would recommend a “Fischjause” dish, made up of the regularly and freshly smoked trout, char and whitefish, which are part of the biosphere of the 67-metre-deep lake with drinking water quality. 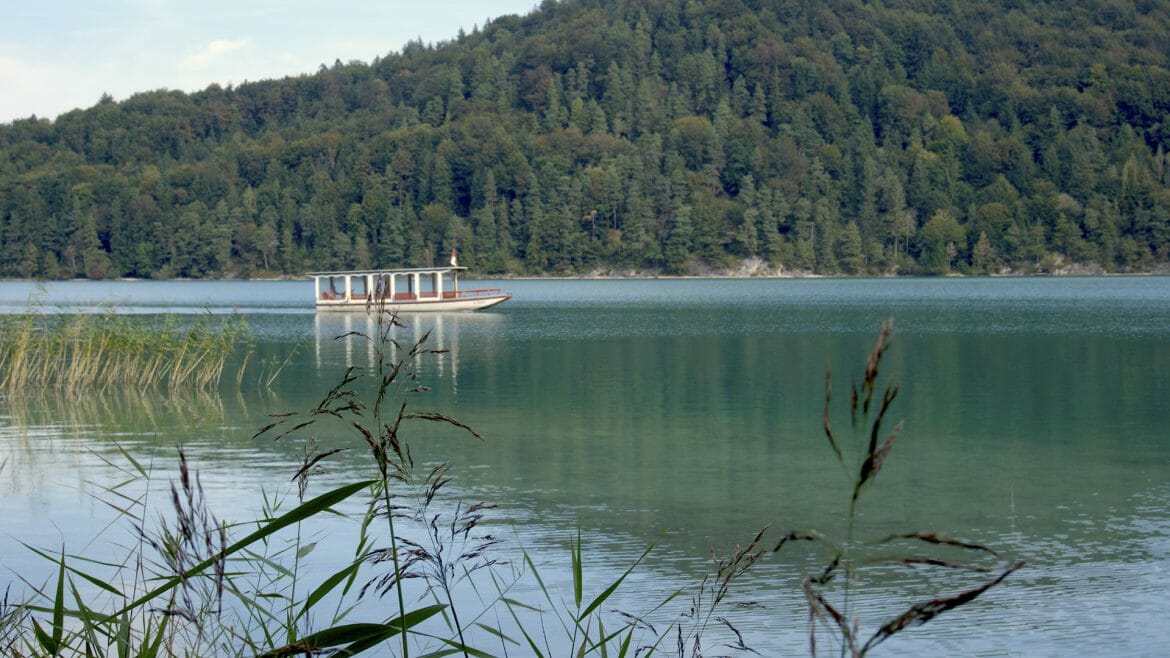 © SalzburgerLand Tourismus – Peter Zeithofer – A unique experience on the Fuschlsee lake: a boat ride across the wonderful lake.

2 A forest swim in the Plötz in Ebenau nature reserve

The Plötz nature reserve in the Fuschlsee region is a magnificent holiday destination for the entire family, providing refreshing delights on hot summer days. In total, five historic mills have been preserved at the gushing Rettenbach stream: between the 14th to the 20th century, the farmers from the surrounding farms of the town of Ebenau had milled their bread grains here. The well-marked Mühlenwanderweg trail leads through the enchanted canyon, passing by mills, old pumps as well as a five-metre-high waterfall with a gravel beach. When arriving on top, one is rewarded with a marvellous view across the Gaisberg and Watzmann mountains. On the way back, the natural swimming pool at the Eder mill invites for a short, magical swim in the forest.

Even in Mozart’s very own city of Salzburg, water is everywhere. The panorama boat “Amadeus” allows passengers to take a ride on the Salzach river, providing some unusual views of the city. The ride leads upstream toward south for around eight kilometres and then back to the dock at the Markarsteg pier. Some of the passengers may be surprised by the swooshing streams that flow into the Salzach river in the old city. These are the Almkanal’s seven outflows — one of the oldest water and energy supply systems in Central Europe. The Almkanal canal was constructed in the 12th century and is an artificial stream bed that brings water from the Berchtesgadener Königseeache river through the Salzburg suburbs of St. Leonhard, Grödig, Gneis, Leopoldskron, Maxglan and Mülln into the old city. Over and over again, one gets to hear the swooshing sounds of the river, for example at the Stiftsbäckerei bakery at St. Peter’s Cemetary or at the Universitätsplatz square. Some of the special features of the Almkanal are the standing surf wave in the city district of Gneis as well as the guided tours through the Stiftsarm of the canal provided yearly during autumn. It leads subterraneously through the Mönchsberg mountain and is a unique witness to the historic hydraulic engineering skills that have been contributing to the city’s water supply for more than 860 years.

In Salzburg, a total of 47 fountains shape the image of the city, among them masterpieces such as the Residenzbrunnen, Kapitalschwemme or Hofmarstallschwemme fountains. But also the wall, market and decorative fountains are considered among the most beautiful monuments preserving Salzburg’s water art. www.salzburg.info 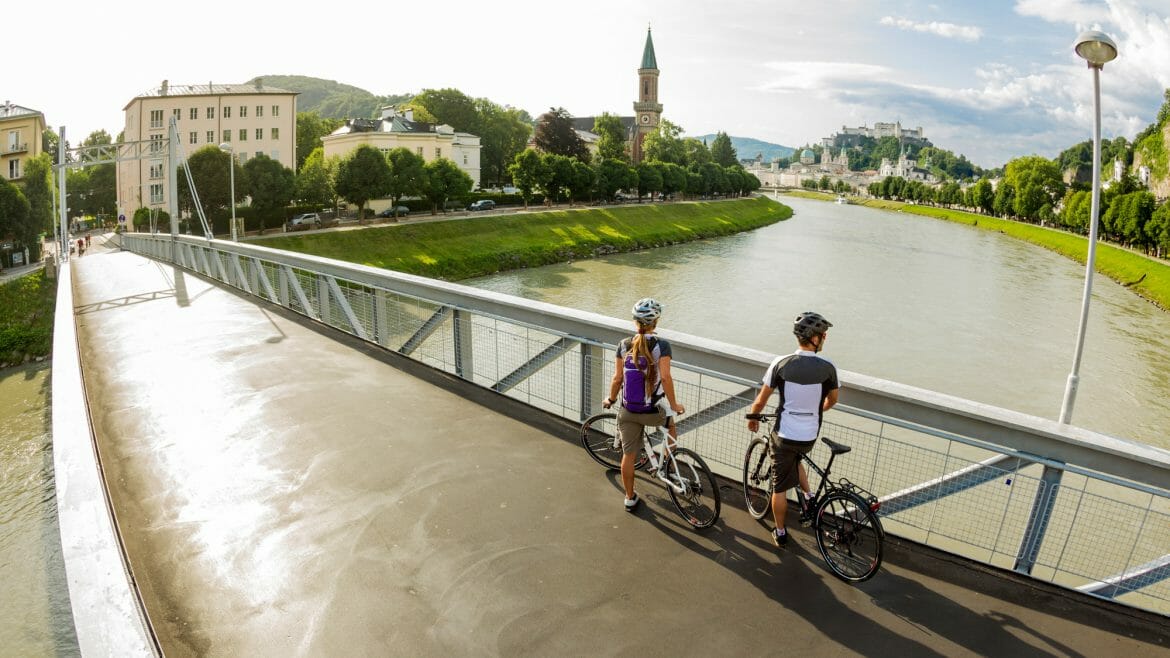 © SalzburgerLand Tourismus, Markus Greber – A couple biking across a bridge

After only three years, Archbishop Marcus Sittkus completed the splendid Hellbrunn Palace with its extensive park. Even 400 years later, Hellbrunn is still considered a genuine jewel at the southern edge of the city of Salzburg with its trick fountains, the Monatsschlössl castle, the Steintheater and the Zoo. Particularly the trick fountains, with plenty of surprising moments, are a real visitor attraction. The richly ornamented grottos, fountains and water dispensers from the 17th century can be viewed as part of a guided tour. One of the highlights is the “Roman Theatre” with the Fürstentisch (princely table) and the stone stools with water dispensers as well as the Venetian mirror grotto that uses water power to create birdsongs. The original Mechanical Theatre from 1750 is a true masterpiece. It depicts a baroque town with more than 100 movable wooden figures and a hydraulic pipe organ. www.hellbrunn.at

5 Golling waterfall nostalgia and adrenaline in the Salzachöfen canyon

Water has always been a point of attraction for travellers, poets and painters. Starting in 1800, the Golling waterfall started becoming a favourite among artists and “Sommerfrische” aficionados, and to this day the 76-metre-high waterfall is a rewarding travel destination. At the foot of the imposing Göll range, it can be hiked bottom-up on a secured trail. Visitors make their way into a magical world with a rainbow bridge, the witch’s cauldron pier, raging waterfall spray, mossy rocks and delicate ferns. At the upper end of the waterfall, you can find its source. The crystal-clear water gushes out of the mysterious, ivy-covered Karstquelle spring at an altitude of 479 metres right out of the centre of the mountain.

Also located in Golling is the imposing Salzachöfen canyon. The breach between the Hagen and Tennen mountain ranges is 80 metres deep and lies directly by Pass Lueg. The canyon, through which the Salzach river makes its way toward north, can be explored by foot as part of a guided tour or be transited via flying fox. www.tennengau.com 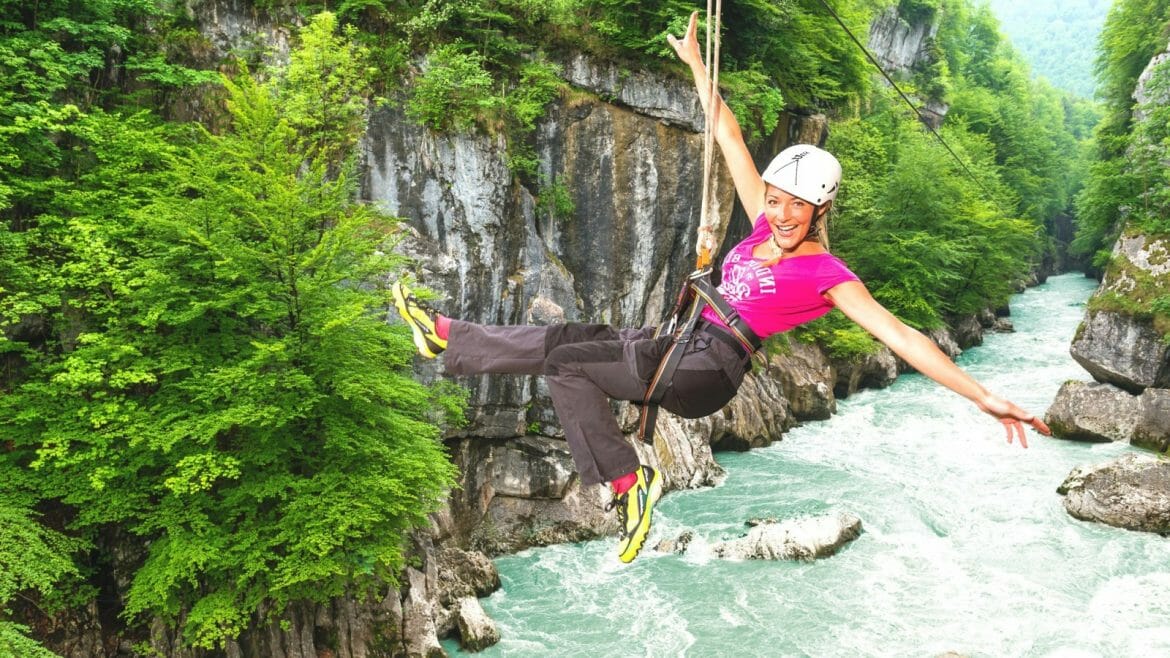 The Liechtensteinklamm in St. Johann in Pongau is considered among the biggest and most beautiful canyons in the Alps with its 300 metres of depth. In the middle of the 19th century, Prince Johann II. von und zu Liechtenstein supported the accessibility of the imposing ravine, which is how it received its name. Since 1876, it can be safely explored via the secured trails and bridges. The experience is absolutely incredible. The water of the Grossarler river shimmers in the most beautiful green and blue hues, massive tree trunks appear like toothpicks in the water and bizarre rock formations are immersed in a fine mist by the raging water spray. The trail through the cool canyon takes around an hour and toward the end, you arrive at the Schleierfall waterfall. The level of noise is considerable and even during warm summer days, warm clothing is recommended.

7 Hiking to the biggest mountain lake in the Eastern Alps, the Tappenkarsee lake

The hike from Kleinarl to the legendary Tappenkarsee lake takes around 90 minutes. This hidden hiking destination on an altitude of 1,762 metres is not only a shining jewel amid the Niedere Tauern mountain range, but with its 24 hectares of surface area and a depth of 50 metres it is also the biggest mountain lake in the Eastern Alps. According to legend, a voracious and vengeful dragon lives in its depths although there haven’t been any sightings yet. At the lake shore, the Tappenkarsee mountain pasture and the Tappenkarsee hut are open to visitors. The hike is also suitable for families, making this a rewarding hiking destination when the weather is right. www.salzburgersportwelt.at 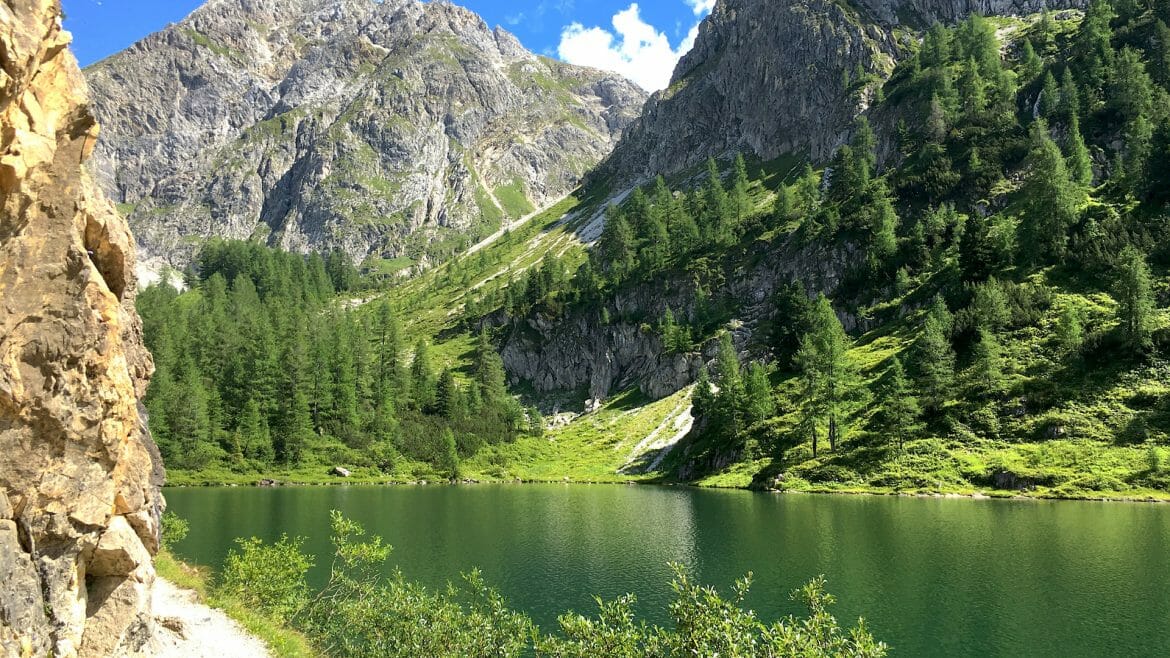 © SalzburgerLand Tourismus – On the Tappenkarsee lake

The legendary treasure of the Lamprecht Knight hasn’t been discovered yet, but the biggest water-bearing cave passage is definitely worth a visit. Right by the road between Lofer and St. Martin in the Salzburg Saalachtal valley, you can find the entrance to the gigantic cave system with more than 50-kilometre-long passage ways. A well-secured exhibition area is open to visitors, which can be traversed in around 90 minutes. You will see water in every corner, because this is a “weathered” cave – it means that the Lamprechtshöhle cave reacts very sensitively to processes taking place up on the Lofer rock mountains. Depending on the water level, the wind can be rather strong in the mountain and rain and thunder can get the cave streams to rise. Thus, you constantly hear water splashing all around and after 25 million years, this process has left amazing abrasions and facets on the cave roofs and the dolomite.

There are around 60 mountain lakes the UNESCO Biosphere Park of Salzburg’s Lungau region — more than anywhere else in Europe. Many of these lakes are hidden in cirques and in between summits, although you can access the Prebersee lake quite comfortable by car. The Alpine Moorsee lake lies at an altitude of 1,514 metres and can reach a temperature of 20 degrees Celsius during summer. It’s a great place to swim if you’re willing to share the meadow with the grazing cows. The lake can be walked around within an hour via the Moorlehrpfad trail. It also passes by the shooting ranges of the unique Preber shooting sport. Since 1834, this traditional event has been taking place on a yearly basis toward the end of August by the lake’s shore. Here, trained shooters do not aim at the actual targets around 120 metres away but at their reflection on the water surface. In the ideal case, the bullet ricochets against the thick water, hitting the target at the shore. In 1957, there was even a request from Walt Disney to film the spectacle at the Prebersee lake. www.lungau.at

The Krimml Waterfalls are considered among the absolute highlights of SalzburgerLand. With more than 380 metres of height and consisting of three stages, the Krimml river crashes into the deep, thereby creating central Europe’s highest waterfall. The roaring of the water masses can be heard far away and makes clear with which primordial powers we’re dealing with here. The waterfall, located in the Hohe Tauern National Park, is four kilometres long. It can be explored during an approximately one-and-a-half-hour-long hike, with viewing platforms providing spectacular sights. At the foot of the waterfall, you will find the WasserWelten (water worlds), an exciting amusement park with a waterfall centre, a water bar as well as an outdoor water park.

The Krimml WasserWelten is not only a spectacular holiday destination, but thanks to Hohe Tauern Health also a unique wellness experience. The treatments, using the mist of the Krimml Waterfalls under doctor supervision, promise relief from asthma, allergies and respiratory disorders. www.nationalpark.at 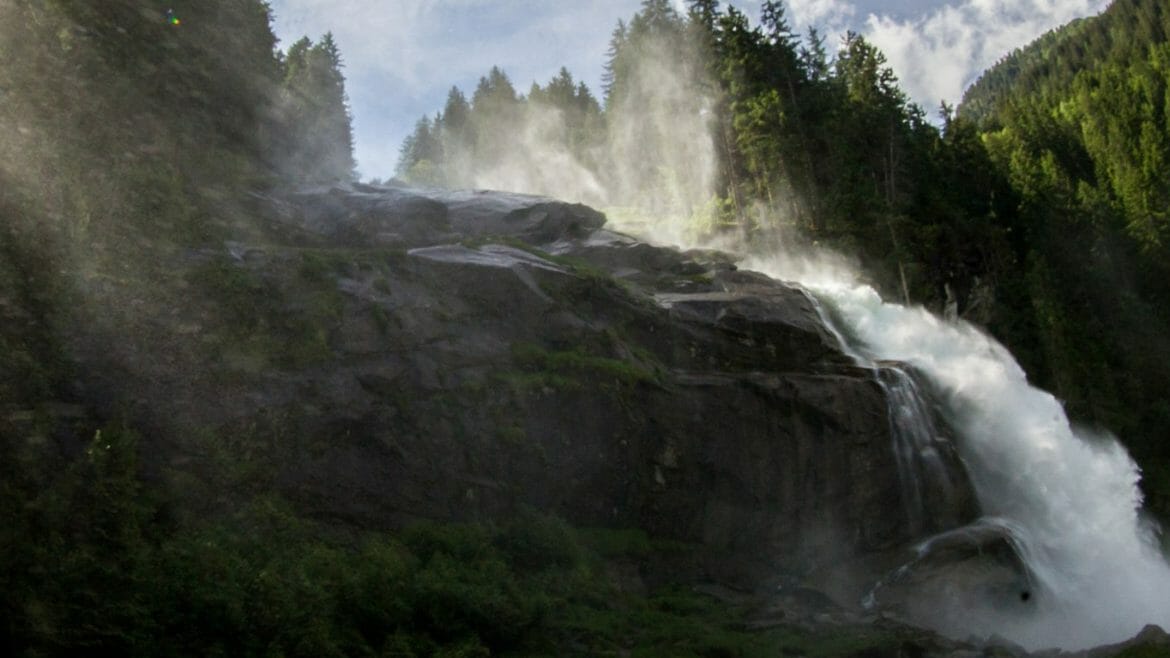