The story of SalzburgerLand’s water

Water and the course of history – whether in the form the endless primordial water, icy glaciers, as a summer holiday magnet for the nobility or as captured by monumental structures.

From the endless primordial water and the frozen ice age to the source for summery retreats, water, in all its shapes and forms, has always played a central role in the lives of the people of SalzburgerLand. The locals recognised the value of this element early on and historical buildings constructed as early as the 15th century already took advantage of the water.

Let us turn back the clock by several million years. Where today peaceful pasture cows graze on green grass, the waves of the primordial water once used to splash. This period of time continues to be attested by countless fossilised shells that can be found in the rock, immortalised like cattle footprints. At the Geologie Park in Weissbach, you can marvel at several of these ancient creatures. This period was followed by the ice age, which covered SalzburgerLand in a one-kilometre-thick sheet of ice. The force of the viciously flowing glaciers formed the landscape and led to the creation of the valleys, cirques and canyons as we know them today. What is left of these enormous glaciers today are the Pasterze Glacier, the Kitzsteinhorn mountain as well as the ice at the Grossvenediger peak. Altogether, there are 925 glaciers in Austria, with a total surface of around 540 km², and 173 of which are located in the province of Salzburg. These glaciers are valuable water reservoirs, which, for example, enrich the Mooserboden reservoir lakes in Kaprun and also play a key role in energy production.

The water channel from the Untersberg mountain

Clear spring water quenches the thirstiest of thirsts. This was already well-known by some of the most powerful rulers, which is why the archbishops of Salzburg, 15th century, had the spring water of the Untersberg mountain brought in by water carriers. In the year 1654, the prince bishop Graf von Thun und Hohenstein built the first water channel from the princely springs at the Untersberg to the city of Salzburg. Using 3,237 pipes made of larch wood, the water was thus delivered to the city for the first time. In order for the citizens to be able to enjoy the water as well, he had the Residenzbrunnen well constructed. The channel, however, could not cope with the high water pressure. Only in 1875, the project was realised once more with a new spring capture and a nine-kilometre-long cast-iron pipe. Today, the groundwater flow underneath the Untersberg mountain continues to provide the biggest proportion of the drinking water for the city of Salzburg and the heritage brewery Stiegl also still brews its beer with the pure, untreated spring water from the Untersberg mountain. 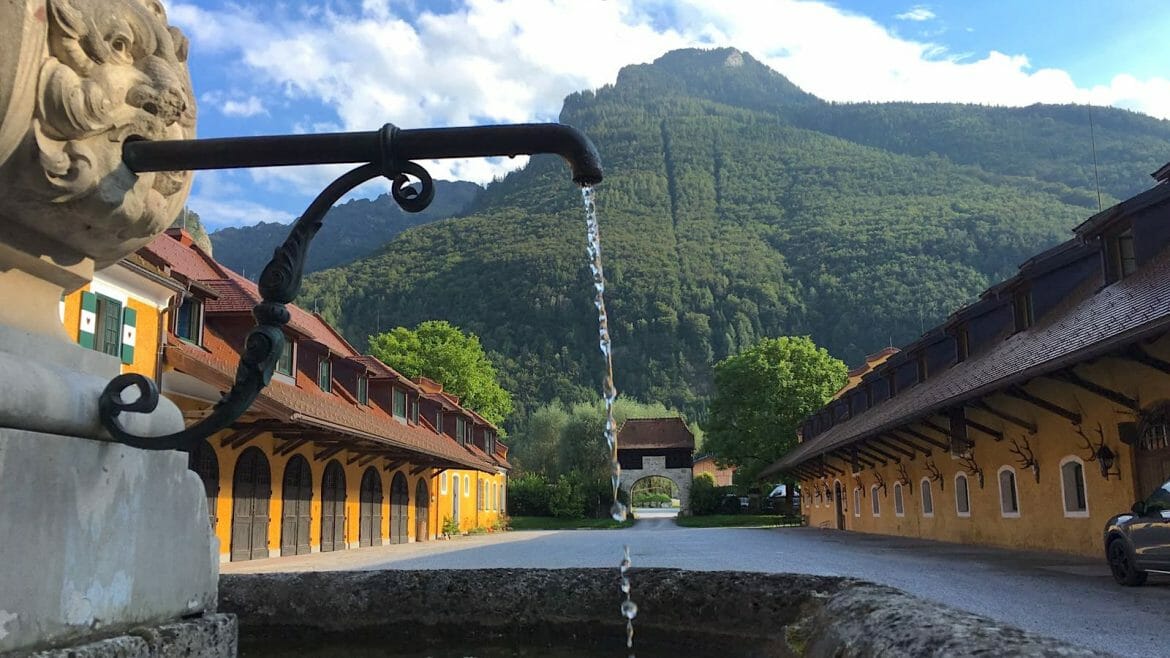 © SalzburgerLand Tourismus, Peter Zeitlhofer – On the trail of the water riders

From water to salt

The salt deposits at the Dürrnberg mountain in Hallein made Salzburg one of the region’s treasures already during Celtic times. Water played an essential role during the extraction of the “white gold”. During production, water was led to the mines and the thereby created brine was heated in the brewing pot until the water condensed, leaving behind pure salt. The salt was then shipped for trade along the Salzach river and provided plenty of wealth for the baroque city of Salzburg. Salt production at the Dürrnberg mountain was ceased in 1989, but the oldest exhibition mine in the world still allows visitors to take an inside look into the world of salt production.

The power of water

The first plans for the Kaprun power plant, which uses the water surrounding the mountains to generate electricity, already began toward the end of World War I. In May 1938, construction began on the Tauern power plant and in September 1994 the first part of the facility was ready to start operations. The storage power plant Kaprun in Hohe Tauern was a milestone in the history of energy supply. The water is largely meltwater from the Pasterze Glacier and the Grossglockner, collected in the Margaritze reservoir and then channelled through the 11.6 km long Möll supply tunnel to the Mooserboden reservoir. Due to the catchment areas located both north and south of the Alpine divide, different climate zones can be reached and used, and are also regulated for flood protection. Visitors to the reservoir lakes travel across the mighty Mooserboden dam, where 84.9 million cubic metres of water are confined. The imposing structure is 107 metres high, 500 metres long and 70 metres thick at its base and continues to be a tourist magnet for international visitors to this day.

In the 19th century, city dwellers were routinely attracted by SalzburgerLand’s rural summer charm. Holidays spent at the domestic lakes during this time were called “Sommerfrische” (summer freshness). Using the railway system, the nobility travelled to various picturesque locations in the Salzburg Lake District Region, and Zell am See in Pinzgau also achieved its first touristic upswing during the beginning of Sommerfrische. Swimming in the crystal-clear lakes, strolling and hiking whilst enjoying the rural air, as well as mountain climbing, were refreshing leisure activities for the aristocrats. Emperor Franz Joseph was perhaps the region’s most famous summertime visitor, who started coming to Salzkammergut in 1853, but also doctors, manufacturers and artists followed in his footsteps. This led to the emergence of a tourist infrastructure consisting of lake swimming facilities, cafes and hotels, many of which have not lost their Sommerfrische charm to this day.

SalzburgerLand is where many large rivers originate from. The Enns river, Salzach river as well as the Saalach river all begin in the province and are a lifeline for the local fauna and flora, but also play a big role in SalzburgerLand’s economy. The Saalach river begins in the Kitzbühel Alps, between Hochtorsee lake and the 2,178 m high summit of the Gamshag mountain in the Glemmtal valley. For 103 kilometres, the Saalach coils through the region of Pinzgau and the Salzburg Saalachtal valley, leaving Austria at the “Deutsches Eck” (German corner), before flowing into the Salzach river at Saalachspitz in Salzburg-Liefering. The Saalach river was used to transport the wood necessary for salt production in Bad Reichenhall for many years. The Salzach river is also one of the great water-rich rivers in the Alps and begins just below the Salzachgeier peak in Wald im Pinzgau and unites with the Krimmler Ache river. It flows along the Hohe Tauern mountain range through Oberpinzgau and Pongau into the Salzburg-Hallein basin and unites with the Saalach river in Salzburg. In Braunau, it flows into the Inn river coming from the west. The Salzach river’s name (salt river) dates back to shipping salt along the river up until the 19th century. The Enns river, which is the longest river that begins and ends in Austria with its 254 kilometres, also originates in SalzburgerLand. The source of the Enns river is in Radstadt Tauern at the foot of the Kraxenkogel mountain. In the Altenmarkt-Radstadt basin, it leaves SalzburgerLand and crosses the border to Styria. 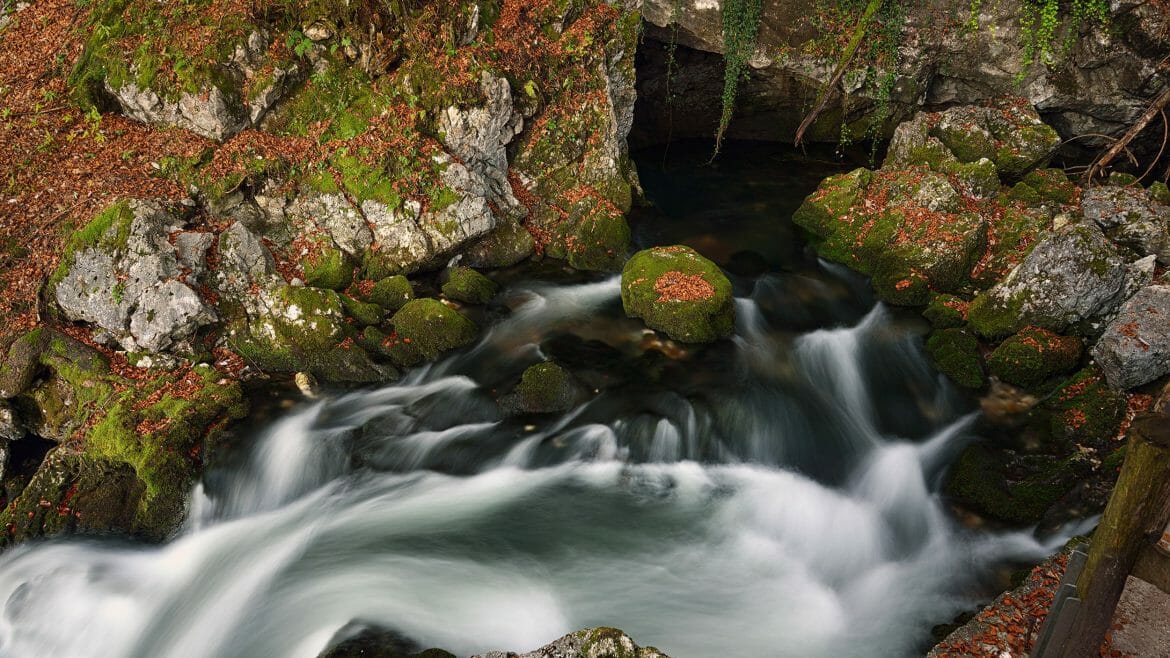 © SalzburgerLand Tourismus, Theresa Kaserer – The source of the Golling Waterfalls

Read  more about The water-rich SalzburgerLand and The top 10 water holiday destinations.