Where water and rock meet

Water that plunges into the depths without hesitation, rock formations that descend steeply and a ravine formed by the devil himself. This ravine is 300 metres deep, making it one of the deepest and longest in the Alps. The "Liechtensteinklamm" in St. Johann im Pongau does not skimp on superlatives, but one thing it provides above all: utterly impressive beauty. Whether it is with your family, as a couple, or on your own – every visit to this wonderful world of water will enchant you and lure you back to this place. That is for sure.

I love water in its many facets. Sometimes it is quiet, sometimes sparkling, and now and then it shows itself in its wild, unbridled power and beauty. Such places make me particularly happy. One of the longest and deepest gorges in the Alps is the “Liechtensteinklamm” not far from the district capital St. Johann im Pongau. The ravine is up to 300 metres deep, cut into the rocks by the water over the course of millions of years. The world that opens up to the visitors there can without exaggeration be described as magical. I had a great time paying a visit to this natural beauty.

Shortly after St. Johann, I leave the federal road B311 and drive a few kilometres uphill, to a large parking lot, where I leave my car. I quickly slip into my hiking boots and put on a light jacket (in the gorge it is quite cool even during the summer). Now I am ready for my first ‘expedition’ through the gorge. On the way to the entrance, the legend comes to my mind of how this spectacle of nature was created. According to the story, the devil wanted to bring water to Grossarl as quickly as possible, but did not succeed in spite of great efforts. Burning with rage over his own failure, he flew over the ravine and hurled the water into it with great force. And thank God for that, one has to say. Without this, many thousands of people would not visit the gorge every year and experience a state of awe – without exception.

Thundering water wherever you look

Gradually warming up and slowly setting off is not exactly how the Liechtensteinklamm gorge presents itself. Even from the entrance you can hear loud noises from the ravine and before you know it, you are in the middle of a wonderful world of waterfalls, towering peaks, steep cliffs and, of course, lots of thundering water. Everywhere there are things to see, each place more beautiful than the previous one. Even after my first few metres I have shot countless photos and short videos. I just can’t get enough. What a spectacle of nature and what a blessing that you can experience this without great effort or alpine equipment. We owe this to a few members of the Pongauer Alpenverein association and the builder Alois Larcher from Grins-Pians near Landeck. Several attempts were needed to build the first footbridges here. Usually, there was simply no money to fund them. In their need, they turned to Prince Johann II of Liechtenstein, who conducted hunts in nearby Grossarl, and was generally regarded as an admirer of nature and the people of SalzburgerLand. He was willing to spontaneously donate the needed funds and so, the challenging project could be completed in 1876. Already in the first year, it is written in the chronicle that 12,000 visitors were registered. Thanks to the noble donor, the gorge still bears the name ‘Liechtensteinklamm’.

Venture down the steep “Helix” staircase

A new attraction in the Liechtensteinklamm gorge is the “Helix”, an approximately 30-metre deep sprial staircase. Follow down it into the depths to get even closer to this natural phenomenon. It makes for a truly breathtaking experience. 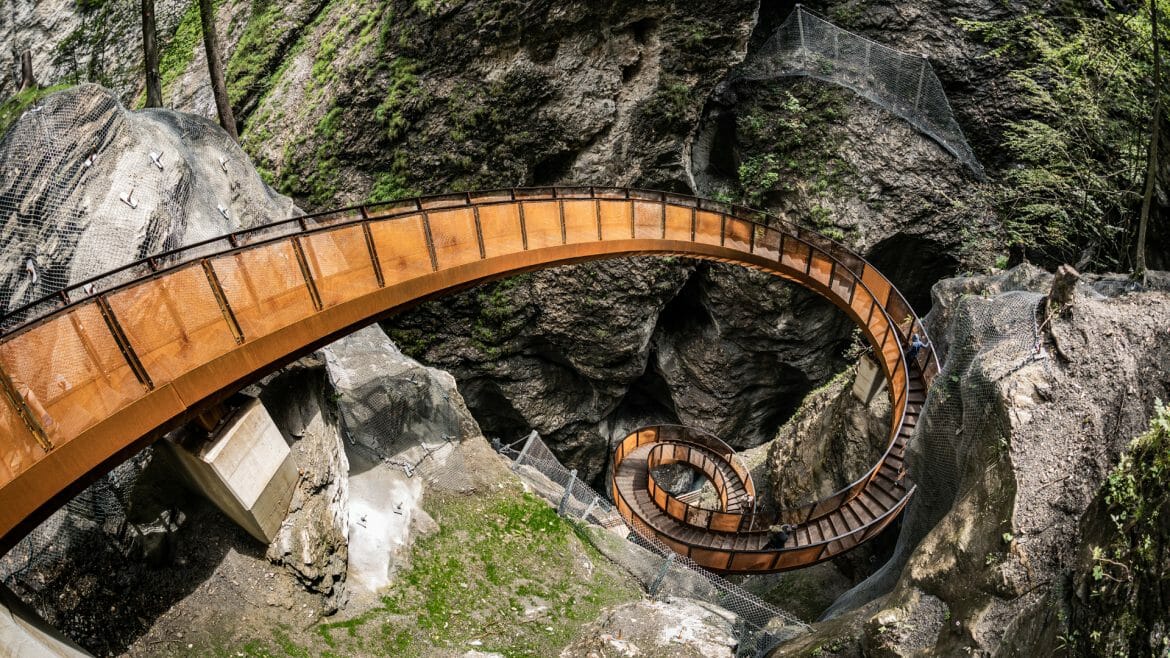 A natural phenomenon of greatest beauty

The raging and thundering water below me abruptly breaks me free from my thoughts. I am standing on one of the many bridges, the water falling far below me, and the mere thought of having to give up my current safe spot discomforts me. This feeling of insecurity was completely unfounded, as a friendly gentleman in the visitor centre told me later on. The path and footbridges that lead through the gorge these days are completely safe. There is not the slightest danger for visitors and they can dedicate themselves entirely to observing nature at play. Slowly the path leads me upwards, again and again, the path crosses the gorge, leads over steep stairs and finally even through colour-lit tunnels. At the end of the path, as if nature had saved the best for last, the ravine opens once again and reveals the view of a waterfall that falls over the rocks. What a sight!

The way back is the same, but the altered perspective gives us another and different insight into the gorge, the water and the rocks. After about 1.5 hours, I reach the entrance to the gorge. Almost a bit sad that it is already over, I admire the great pictures at the visitor’s centre and look through the souvenirs for a bit. By coincidence, I see a poster while passing by with the inscription: ‘Liechtensteinklamm in torchlight’ – to the sounds of classical music, visitors can wander through the torch-lit gorge up to the waterfall, experiencing this wonderful world of water in the dark. Wonderful! My next visit here to the gorge is already decided.