Advent season and Christmas customs in the land of “Silent Night”

Advent is the time of festivities, music and contemplation. For many, it is the most beautiful time of the year, because it’s a chance to honour old customs and events from childhood. Children write lovingly decorated letters to the Christ Child, and biscuits and Christmas fruit bread is baked with the family for the Christmas festivities. St. Nicholas and Krampus go from house to house and every Sunday, another candle is lit on the Advent wreath. While houses and apartments are being decorated with a warm heart, the land of “Silent Night” reflects on ancient traditions: special culinary delights, traditional songs and customs that are passed on from generation to generation.

The first Sunday of Advent in the land of “Silent Night” traditionally marks the start of a reflective time. While friends meet at Christmas parties and Christmas markets, families pay attention to ensure that alpine customs are preserved. During Advent, the Advent wreath, which is made of fir branches, is a faithful companion. The word Advent is derived from the Latin term “adventus” – arrival. It is about pausing and reflecting, but also about preparing for Christ’s birth. In the land of “Silent Night”, this is done with special festivities and customs – many of them handed down from the generations while others have been added over the course of time.

Advent is a wonderful time especially for the children. When the first snow falls from the sky, sleds and skis are fetched from the cellar. A letter is written to the Christ Child and placed in the window, in the hope that it will fulfill all wishes. Together, biscuits are baked, Christmas carols are sung and stories are read. And from time to time, someone will stand at the door who will give you the chills: Krampus – as a companion of St. Nicholas.

The 5th of December is the much feared Krampus day in Upper Austria, Tirol and SalzburgerLand. It is the eve of St. Nicholas day. With the dull sound of bells, the Krampus characters roam the streets wearing goat horns, sheepskins and carved masks. They are the dark companions of St. Nicholas, who enquires as to how obedient the children had been that year. The good children are given gifts, the naughty ones punished. This is the tradition. Luckily, the reality is quite different: A St. Nicholas bag filled with candy, peanuts and mandarins is handed to each child. In the country villages, St. Nicholas moves from house to house with his entourage, but there are also large, organised Krampus or Perchten runs.

A “Kripperlroas” through SalzburgerLand leads, amongst other places, to the Nativity Set Exhibition in Salzburger Heimatwerk or to the Salzburg Christmas market, to the Museum Schloss Ritzen Saalfelden, to the Grossarl Valley or to Mariapfarr. The Christmas nativity set here with around 100 restored figures from the time when Joseph Mohr wrote the lyrics is a real attraction.

“Anglöckler” reminds you of hotel stays

Also in Advent, the “Anglöckler”, “Anklöpfler” (Tirolean) or sage blowers are on the doorstep: Small groups of singers, dressed as shepherds, move from house to house symbolically following the pastoral visits of Joseph and Maria. They ask for admission, sing songs and tell little stories. Their knocking on the door is meant to evade evil and bring blessings and happiness to the new year. This custom goes back to an old tradition: In former times, the many farmhands on the farms were dependent on small donations from neighbors to survive the winter. Today, the “Anglöckler” is granted entrance almost in every house. They are fed and given gifts, and then go outside into the night. 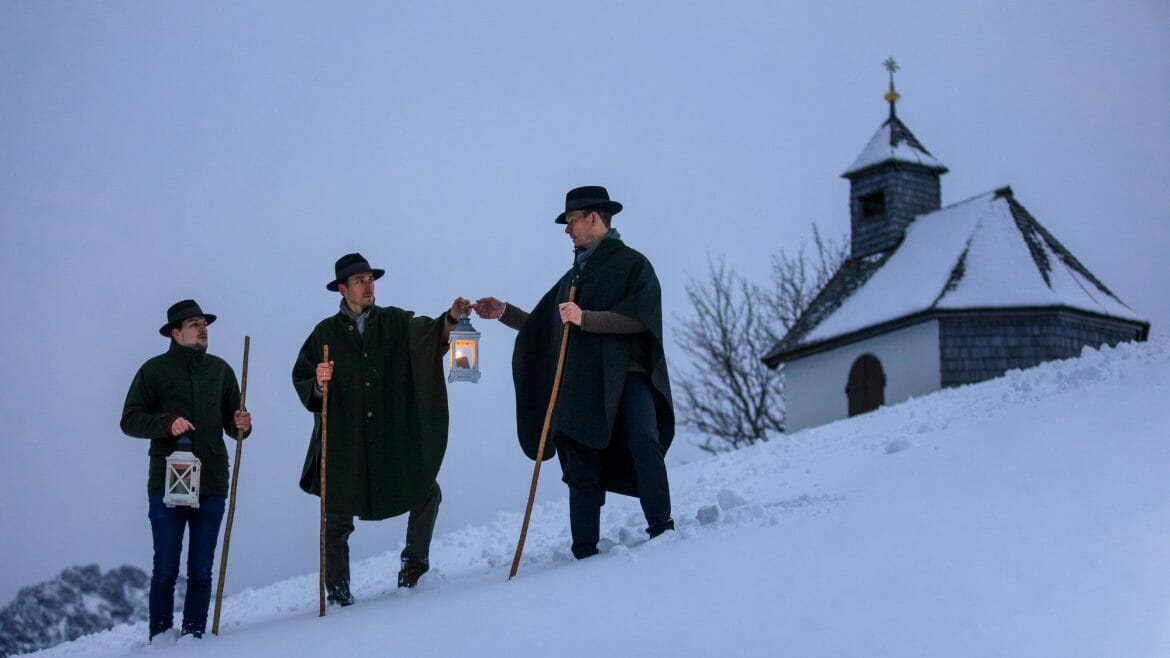 A particularly beautiful custom in Advent is the “Kripperl” (nativity set) viewing. Nearly every church has one on display. The scenery and the representations in the nativity set change from week to week and stimulate the children’s imagination. In addition, they build a bridge between the Christian faith in the incarnation of God and the “Christkind” (Christ Child), who ensures that Christmas presents are placed under the tree.
February 2 (Candlemas) marks the end of the Christmas and nativity set calendar, both in the churches and private homes. The Christmas trees traditionally also often remain in the living rooms until this day. Since the 18th century, it has been customary to place small nativity sets in the home.

A special time between Christmas and Candlemas

There is hardly as much mysticism and magic in the air as around the Christmas period. When the nights in the Alps are particularly long and the days are particularly short, the light is reborn. Traditional customs have been handed down from generation to generation and are now as authentic as they were hundreds of years ago to protect the farms, homes and livestock, for a rich harvest in the new year, happiness, peace and health. At Christmas, people bring a piece of nature into their own four walls with a Christmas tree. It is decorated with balls, beeswax candles and sweets. The mystical Twelve Days between the winter solstice on 21 December and the Epiphany on 6 January is kept alive archaically. According to legend, during these nights, the female Percht, a type of Alpine goddess, roams with her wild entourage. She is considered to be the protector of women, and especially single mothers.

Smudging during the Twelve Days

The Twelve Days have attracted plenty of legends and superstition. During these nights, for example, laundry should never be allowed to dry. It can also be used as a weather forecast for the next twelve months. On these nights, the ancient custom of smudging with incense, tree resin, and dried herbs is practiced, as a farmer from the Lungau region describes: “We go through the house with the smoking tray, across the yard, through the stables, and ask for protection and blessings in the new year. On Christmas and New Year’s Eve, we sprinkle with holy water and pray the rosary.”

Perchten runs in the Alps

Organised Perchten runs – there are pretty and ugly Perchten (Alpine mythical goddesses) – are held at the beginning of the year in SalzburgerLand as well as in Upper Austria and Tyrol. For instance, the Trester in Stuhlfelden in the Pinzgau reagion are considered the pretty ones who dance, sing and dance for fertility. In many Tyrolean places, elaborate percussions such as in the Tyrolean lowlands with fire performances and terrifying figures are organised. The disguised men wear carved masks and bells as the Perchten are meant to drive away the evil winter spirits.