The global journey of “Silent Night”

More than two hundred years after “Silent Night” was first performed in Oberndorf, it is counted among the best known and most beloved Christmas songs — taken up and interpreted by musical artists from across every genre. Every year on Christmas, it is sung by around two billion people across the globe: on all continents and in 300 languages and dialects. The song’s dissemination around the world is almost as much of a miracle as its creation. Or, to put it in Victor Hugo’s (1802 – 1885) words: “Nothing is stronger than an idea whose time has come.” You might say that the world had finally been ready for “Silent Night”.

24/12/1818, Oberndorf near Salzburg: Birth of the song “Silent Night”, performed by its creators Joseph Mohr and Franz Xaver Gruber.

1819, Waidring: A version of the song with seven (!) verses is contained in the now missing church songbook of Blasius Wimmer, organist and teacher in Waidring. It is quite possible that Carl Mauracher passed the song onto him during his “repair travels”.

December 1822, Fügen: Emperor Franz I of Austria and Alexander I of Russia are guests at the castle of Count Dönhoff. The Count asks the Rainer siblings to perform folksongs for the entertainment of his guests. Among other songs, they perform “Silent Night”, impressing the visitor from Russia especially. He invites them to his court in St. Petersburg.

Autumn 1824, Fügen: The Rainer siblings begin their first journey abroad to Germany. They found the era of the “Tirolean national singers” who significantly contribute to the dissemination of “Silent Night”.

November 1825, Fügen: The Rainer siblings (“Ur-Rainer”) begin their second concert tour. It leads them from Germany to Sweden and England. As Alexander already passes away in December of 1825, they change their travel itinerary. The “Ur-Rainer” group continues to travel through Europe until 1838.

1827 – 1832, Steyr: Joseph Greis, book printer and seller in Steyr, releases a flyer with the title “Four Beautiful New Christmas Songs” between 1827 and 1832 (exact date unknown): “Silent Night” is also announced on the cover page. This proves that the first print dissemination of the song began in Steyr. Since Greis was a book seller too, people were able to buy the print directly from him as well.

December 1831, Hippach/Leipzig: The Strasser siblings from Laimac near Hippach perform “Silent Night” at the Christmas market in Leipzig. The family of farmers from the Zillertal valley spends the winter months travelling Europe as goods dealers to sell local hand-made products on the markets, especially gloves. It quickly became apparent that singing folk songs was good for sales.

1832 – 1834, Leipzig: The Strasser siblings are invited to Leipzig for additional performances. This leads to “Silent Night” being put down in written form once again: Between 1832 and 1834, the publisher A. R. Friese from Dresden released a collection of Tirolean Christmas songs with the title “Four Authentic Tirolean Songs by the Strasser Siblings from the Zillertal Valley.” The result is a “Zillertal version” of the song, which could be traced back to the Strasser siblings.

1838, Leipzig: Inclusion of “Silent Night” into the melody book of the “Catholic Song and Prayer Book for Public and Private Worship for to be Used Primarily by the Catholic Community of the Kingdom of Saxony.”

1839, New York: The second generation of Rainer singers — under the aegis of Ludwig Rainer, son of Maria Rainer — from the Zillertal valley begin a concert tour to America: They’ve also got “Silent Night” in their repertoire. The first performance of the song allegedly takes place in front of the Trinity Church in New York. What follows are several years of touring as the admired “Rainer Family” which leads the four singers through New Orleans, St. Louis, Pittsburgh and Philadelphia.

1840, New York: In March 2018 Silent Night researcher Martin Reiter found the oldest published version of „Silent Night! Holy Night!“ outside of Europe, printed 1840 in New York. The song was found, with lyrics only an without music signs, as number 22 in the „Liederbuch für die Jugend. Nebst einem Anhange von Melodien.“ (songbook for the youth – besides an attachement of melodies), which was published in 1840 by the in „Amerikanischen Tractat Gesellschaft“, located in the Nassau-Street 150. 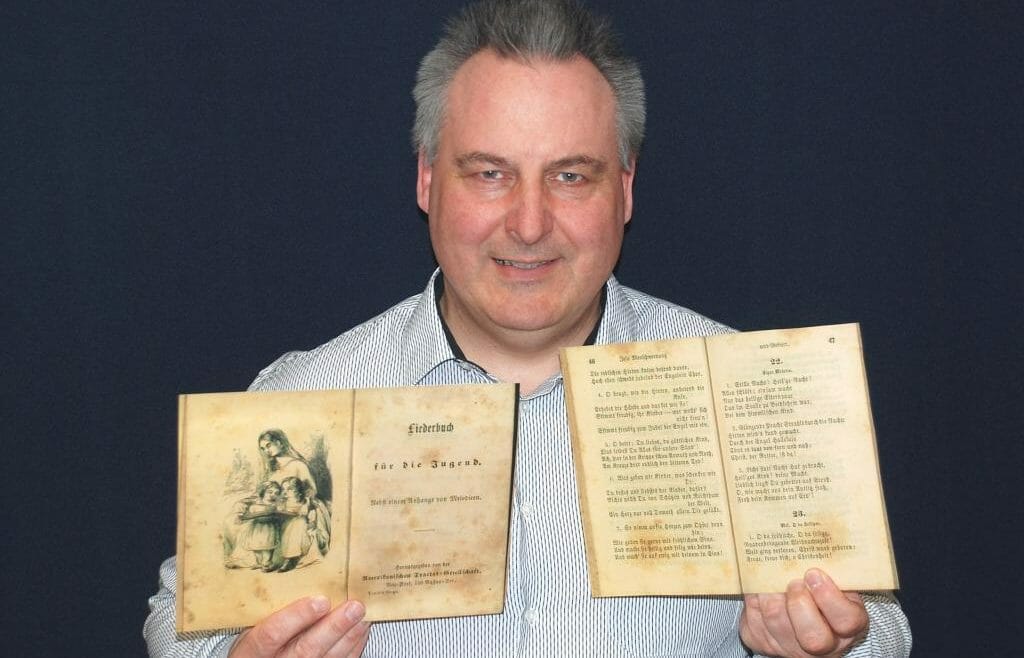 1842, Boston: “Silent Night” appears in one of the Rainer Family’s songbooks.

May 1843, Zillertal valley: The Rainer Family returns home after their US tour.

1844: The theologian and founder of the Diakonie, Johann Hinrich Wichern, managed the “Rauhe Haus” in Hamburg, a training centre for future social workers and missionaries. He made a significant contribution to the dissemination of the song. In 1844, he published his own songbook entitled “Unsere Lieder” (our songs) which also includes the song “Silent Night“. As one of the largest emigration harbours, Hamburg was the hub of many emigrants who carried the song to America, accompanied by missionaries from the “Rauhe Haus” and the song book in their luggage.

1851, Zillertal valley: Emboldened by the success in the USA, Ludwig Rainer founds the “Rainer Gesellschaft” group with up to 15 singers, which will perform for nearly all of Europe’s ruling families. Their travels bring them to England, Scotland, Ireland, to Italy, France, Denmark, Sweden and Norway.

1854, authorship clarified by Franz Xaver Gruber: In 1854, the Royal Prussian Court Orchestra approaches St. Peter’s Abbey in Salzburg to inquire about Michael Haydn, who was considered the originator of the song at the time. Frederick William IV of Prussia required the sheet music for his court orchestra and thus requested a copy from St. Peter’s Abbey in Salzburg. Coincidentally, one of his Franz Xaver Gruber’s sons is present in the seminary and can thus clarify the song’s authorship. Shortly thereafter, Franz Xaver Gruber creates a document to finally clear up the situation regarding the origin of the Christmas song.

1858 Moscow/St. Petersburg: The Rainer singers come to Russia and stay there for ten years. Visits home are only carried out to find new members.

1859, New York: “Silent Night” is released in the form of an English translation as part of a brochure titled “Carols for Christmas Tide” by the episcopal priest John Freeman Young.

1866, Salzburg: The song is incorporated into an “official church book” at home.

1873, Vienna: “Silent Night” appears as the “Choral of Salzburg” at a North American school building at the World’s Fair in Vienna.

At the turn of the century, “Silent Night” has already been sung on all continents, disseminated by Catholic and Protestant missionaries.

24/12/1914, Flanders: Fraternisation of soldiers on the Western Front, who sing the song together across the trenches.

1941, Washington: Franklin D. Roosevelt and Winston Churchill sing “Silent Night” together in the garden of the White House.