When the days get short and the nights get long, it is all the more comfortable inside the lounge. Especially when you can listen to the old myths and stories. For, it is said, around this time many evil spirits are doing their mischief. But fortunately, we know everywhere how to expel and appease these spirits.

Yes, traditions are maintained in SalzburgerLand, especially during the dark season. From the scary, furry & noisy Krampus to the traditional Easter fire on Holy Saturday. One remembers the old customs and people move from house to house in various costumes in order to drive out the evil spirits and bring happiness & blessings.

Join us on a mystical journey through wintry SalzburgerLand.

For children, the 5th or 6th December is the first highlight of the Christmas season. This is when they wait impatiently for Nikolaus, who moves from house to house with his good gifts. Beforehand, it’s a good thing to think about whether you’ve really been good all year round. For Nikolaus’ companions, the horrible Krampusse, are all too happy to threaten with the rod.
But, even if a little scary, the shaggy journeymen are great to look at all the same. In almost every municipality and of course also in the City of Salzburg, the Krampusse make the streets a little unsafe around the 5th December with their organised runs. 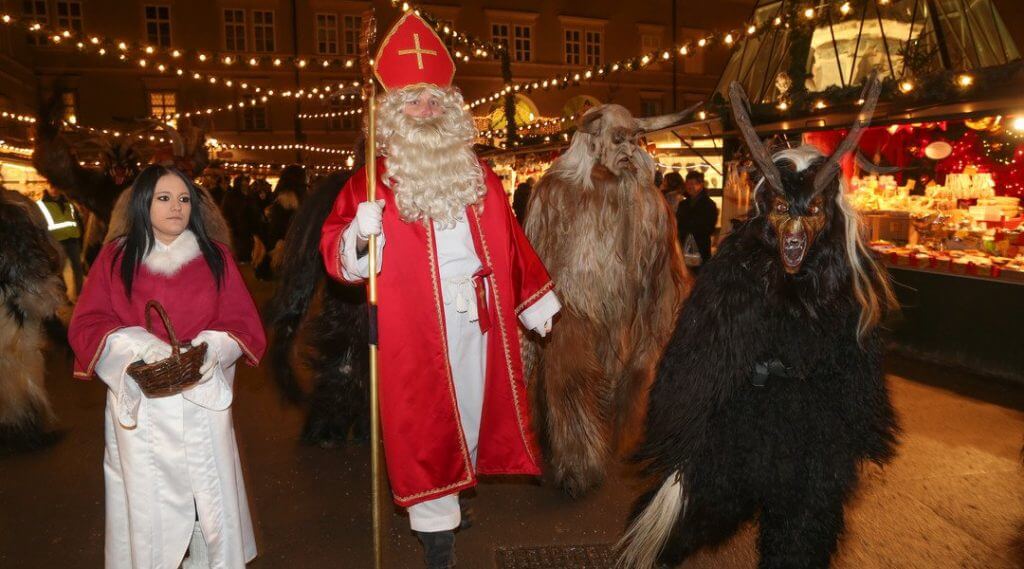 Every year during the evening of the 2nd Thursday in Advent they it appears – the “Wüde Gjoad” (Wild Hunt) from the Untersberg Mountain. Where exactly, no one knows (psst., between us, a call to the Grödig Tourist Board may help).
Death, witches, demons and more, bears and bear drivers roam around with a lot of noise and perform their traditional dance to loud drumbeats and whistles.  Even if the Wild Hunt seems scary, it brings happiness and is supposed to drive out the evil spirits. 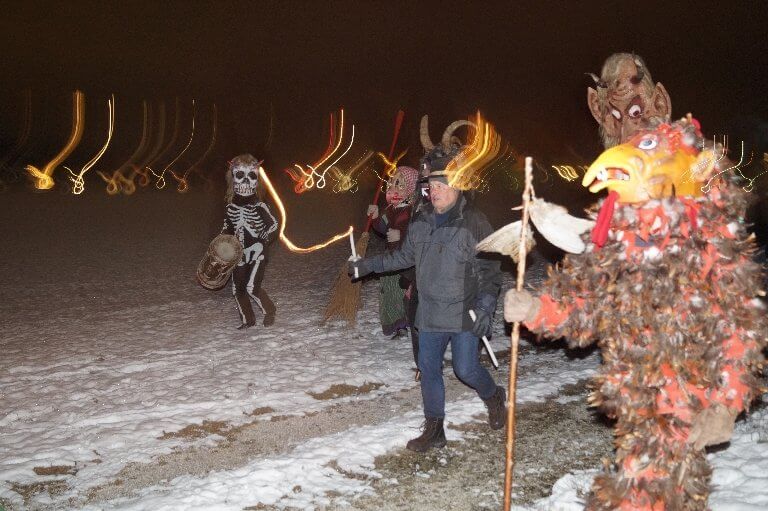 The three Thursdays before Christmas are considered so-called bell-ringing nights. This is when the Anglöckler (bell ringers) go from door to door. With their traditional songs and poems, they not only bring blessings, but also proclaim the imminent birth of Christ. The origin of this custom goes back to the Middle Ages. At that time, it was the perogative of the poor to go from door to door asking for gifts. The bell was brought along to announce their coming. 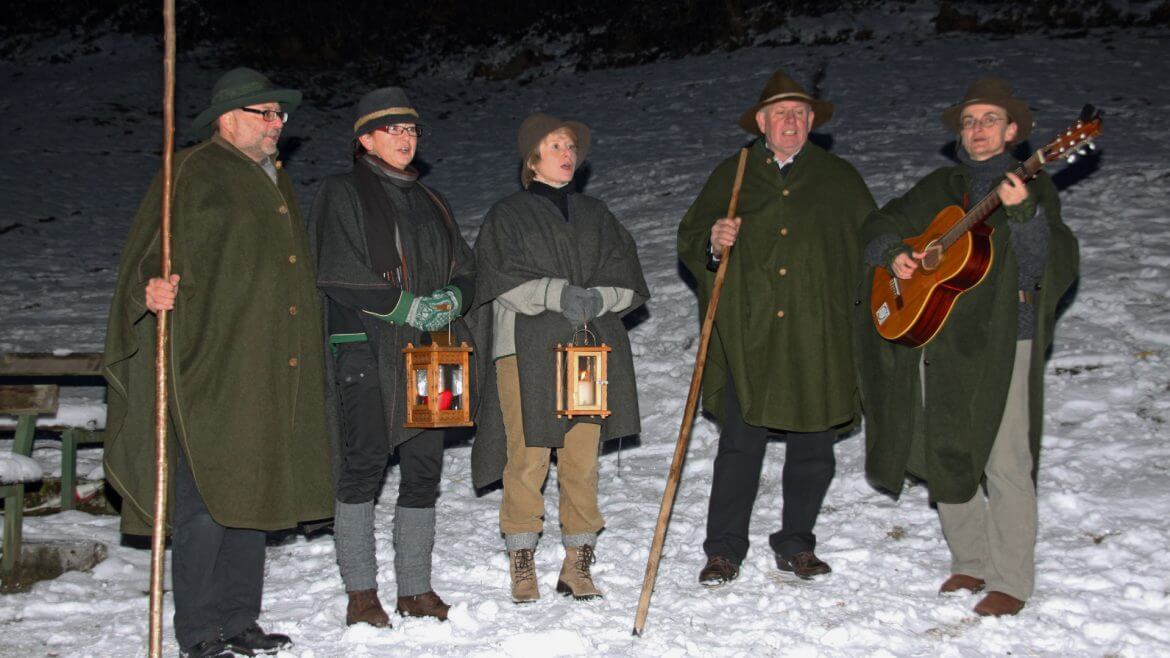 The nights between 21st December and 6th January have always been considered as particularly mystical.  Does it not mean, for example, that on Holy Night, and only then, the animals can speak the human language?
Here in SalzburgerLand, the tradition of smudging is very well maintained at this time. With the smudging bowl in hand, the whole family moves through the house, the yard and the stable to clean the rooms and dwellings of bad energies and make room for new things. Which herbs are used for smudging is known by the many herbal women who pass on their knowledge to interested parties in numerous workshops.

The Rauriser Beaked Perchten are truly unique. And the Rauris people themselves are well advised on this day, the eve of the Epiphany, to clean everything up carefully.  For if the figures with their long Perchten beaks do not like one thing, it is disorder and dirt. Matching their costumes, they approach with a “ga-ga-ga” and everywhere they are eagerly awaited. For with their brooms they drive out evil. And only after a little refreshment and the traditional blessing, to peace, health and rhyme, do they move on to the next house. 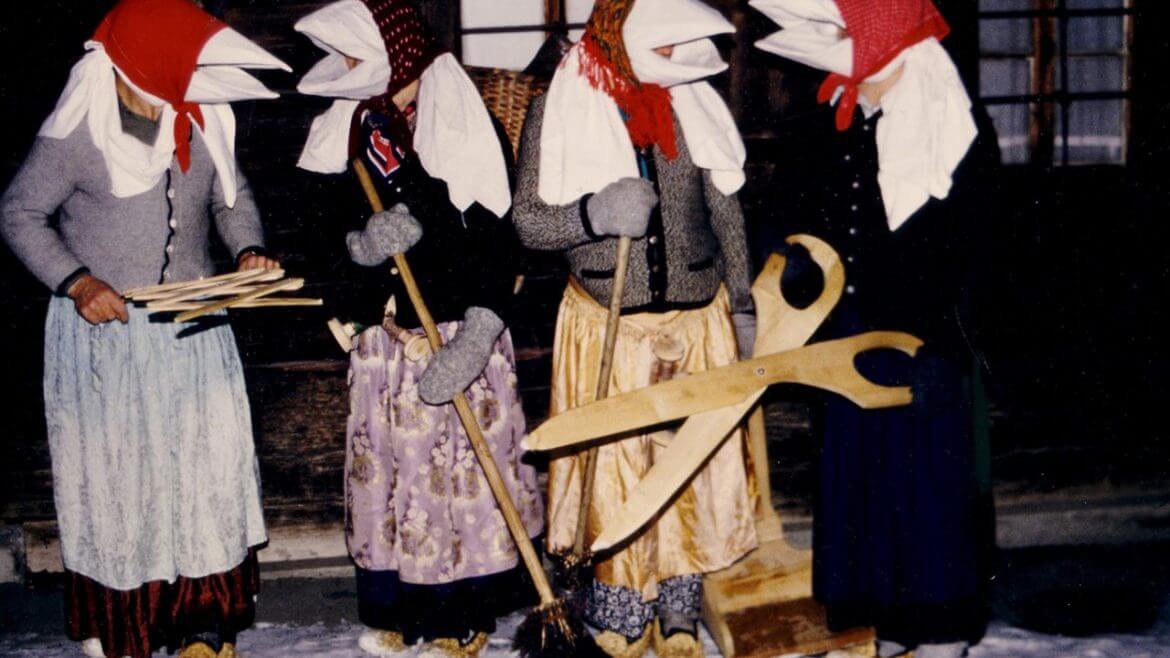 The Glöckler (bell ringers) are the perfect light-bringers every 6th January who travel around the Salzkammergut region. And in fact, the bright Glöckler caps are illuminated from the inside and the Glöckler themselves are dressed in white.  With their light they conquer the darkness and coldness of the year that has just come to an end. Up to 300 working hours are invested into one Glöckler cap and no two are the same. Thus, these beautiful Perchten spin their circles, figures of eighth and spirals and finish every dance with the Glöckler saying – “Happiness and blessing for the new year”. 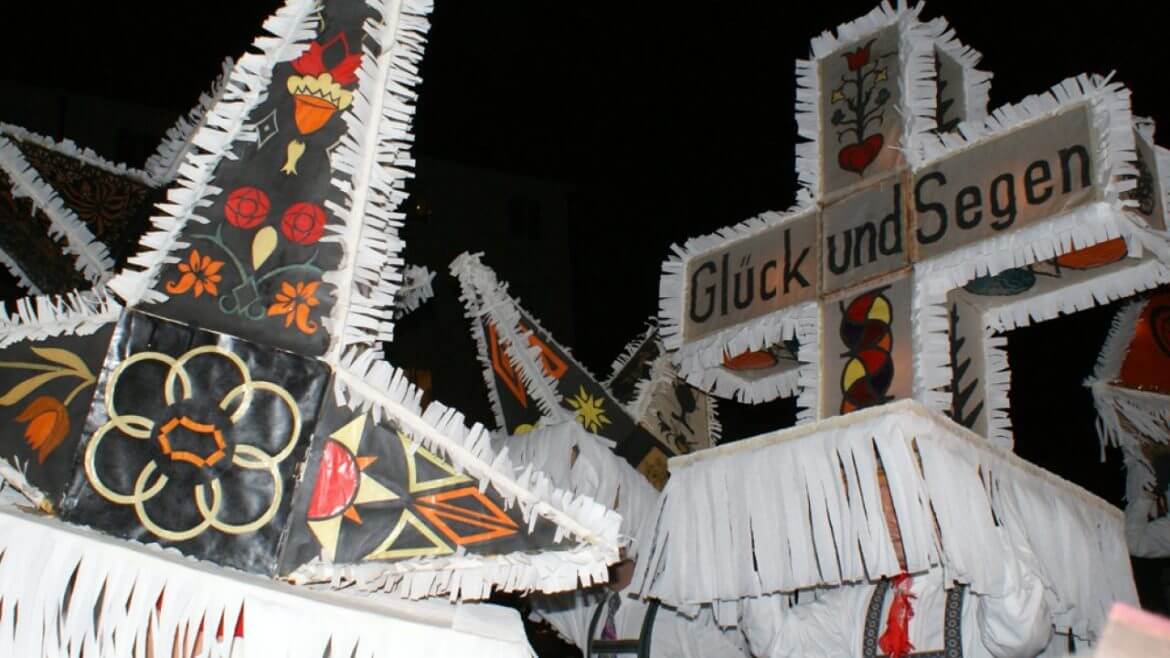 With more than 400 participants, the Pongauer Perchten Run, which takes turns year after year around Epiphany in Altenmarkt, Bad Gastein, Bischofshofen and St. Johann is truly a worthwhile event. Nowhere else can you experience so many beautiful Perchten at once. And each figure is more mystical, fabled and imposing than the other. Whether demons, bear drivers, witches, devils, beaked, ugly or beautiful Perchten, tree weavers, or even the Lindworm of the Tappenkar – here all come together. 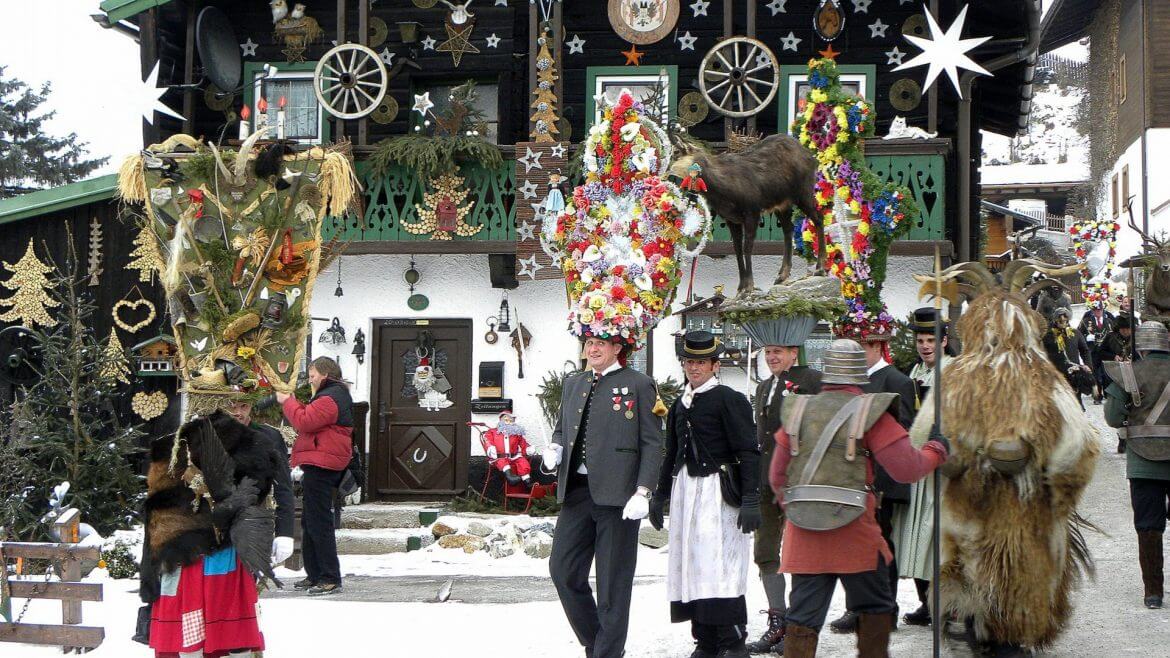 “To peace, health and rhyme” the Tresterer wish when they are around on the 6th January in Pinzgau. With their eye-catching clothing made of fire-red brocade and the hat with its colourful silk ribbons, these beautiful Perchten are something very special. Weeks before the big performance, the thousand-year-old dances are rehearsed, which make up the unmistakable Tresterer “stamping”. The Tresterer can be seen exclusively in Pinzgau and there only in the towns of Stuhlfelden, Unken, Bruck, Saalfelden and Zell am See. 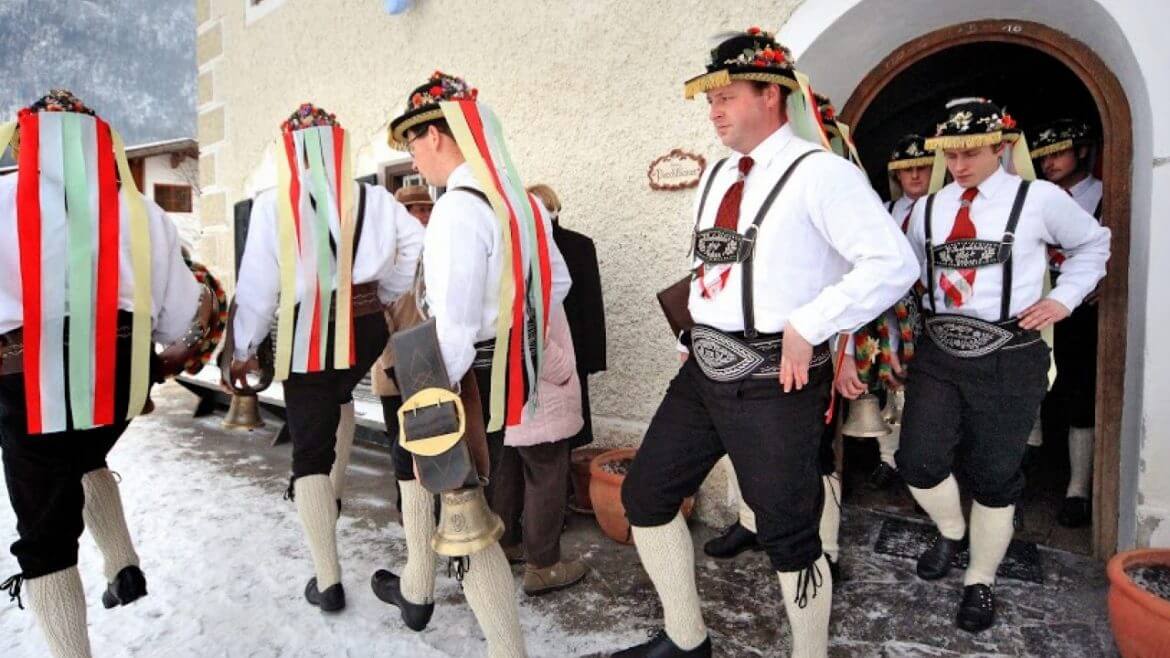 Even if winter at the end of December has not even really got going, from the Stefanitag (26th December) the Alpine Schnalzer start to rebel against the snow. Because in Flachgau or in the Rupertiwinkel (which also includes the neighbouring Berchtesgadener Land) the teams with their whips, the so-called Goaßln, stand in the fields in order to drive out the snow and to bring the underlying seed to new life. The loud bangs and whip-swinging follows a very specific process that needs to be well rehearsed. And the junior Schnalzers are also already eagerly involved. 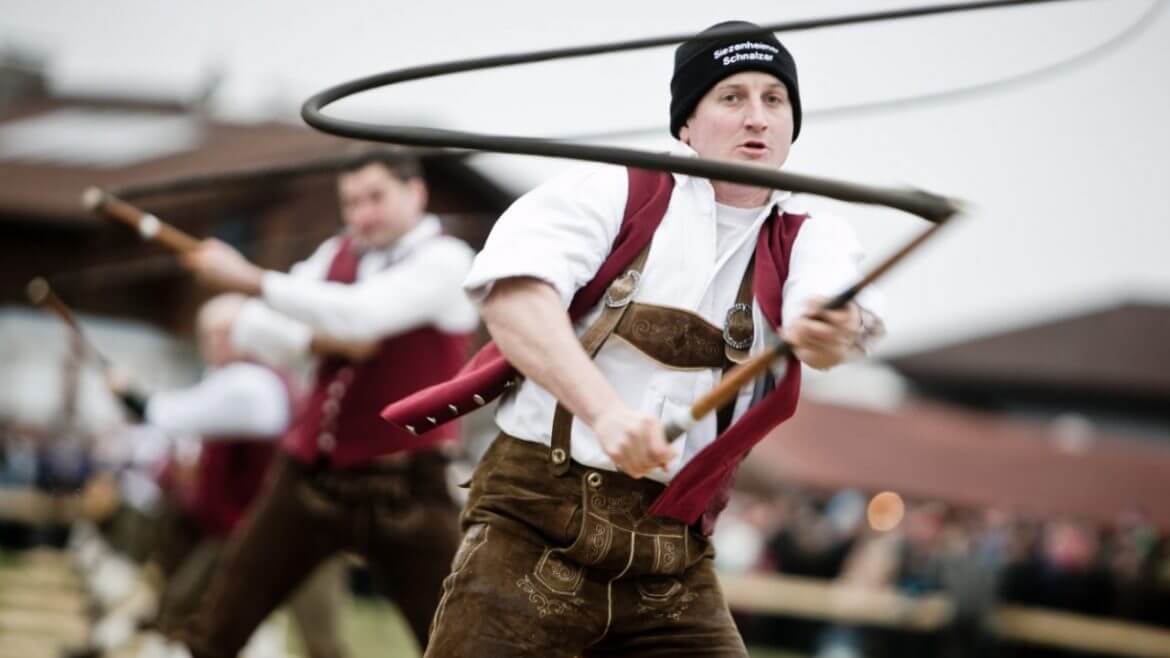 A completely different custom, but no less unique, is the Butcher’s Jump on Carnival Sunday. After the festive mass, it gets a little uncomfortable for the newly crowned butchers. For, with a leap into the wooden vat filled with cold water, their sins from their training period are washed away.  And then, it is still necessary to prove their strength when swinging the 40 kg guild flag. 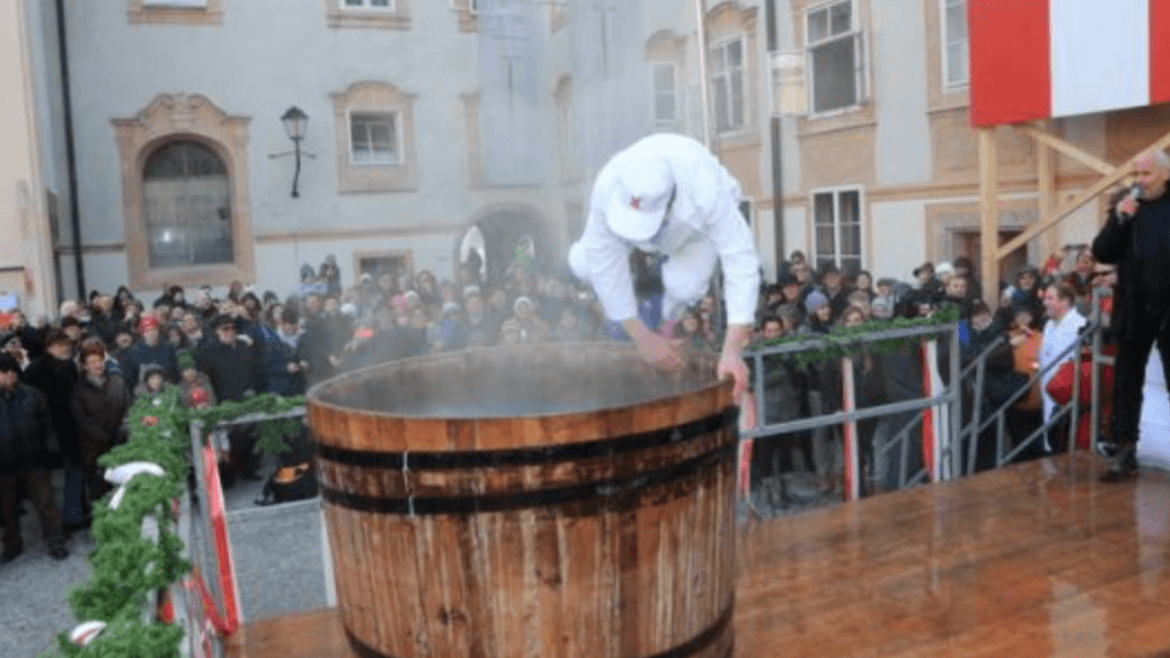 With the approach of Easter, the winter season really draws to a close. And everywhere the approaching spring is longed for. In a very special way, the reawakening of nature is celebrated in Salzburg’s Lungau region and at the same time the Resurrection of Christ is commemorated. During the night of Holy Saturday to Easter Sunday, numerous Easter fires illuminate the darkness. For this purpose, wooden structures up to 12 metres high are specially designed. 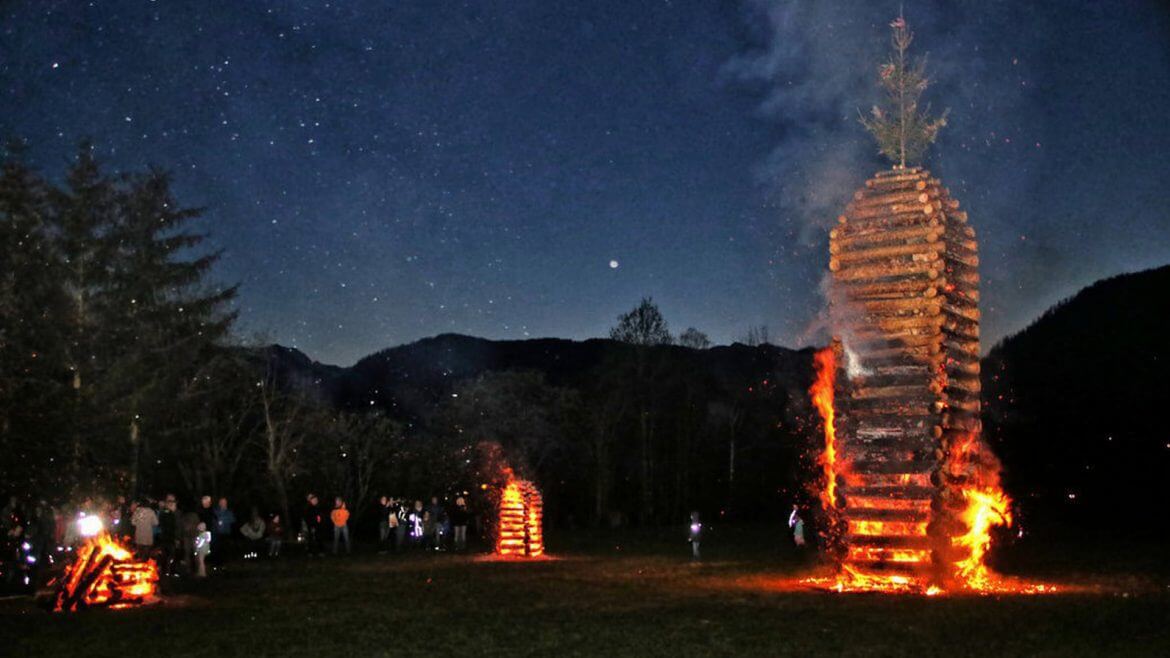 Another special custom at Easter time is inseparable from SalzburgerLand. In the small Tennengau town of Puch, a more than 400-year-old carved “palm donkey” with Christ riding on it are carried along during the Palm Sunday procession. In the Middle Ages, this form was widespread. Thus, even those who were unable to read could be brought closer to the Bible history in a vivid way. Today, the Puch palm donkey is, aside from a second wooden donkey in Tyrol, the last of those Easter procession figures from the 17th Century. 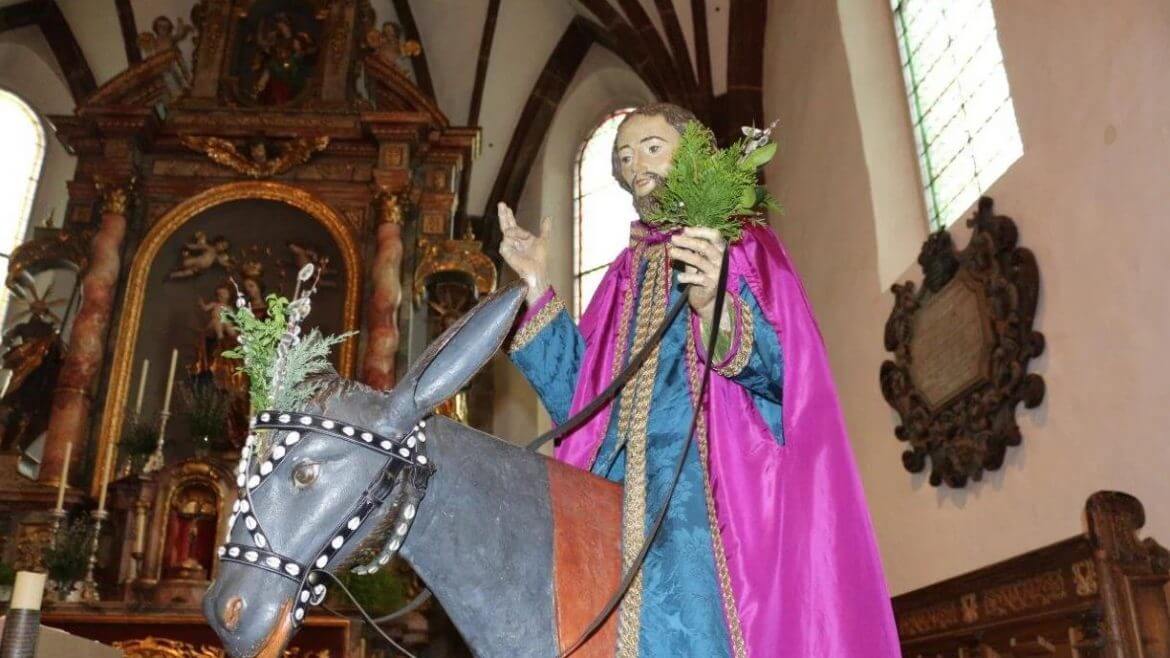