c ideenwerk werbeagentur gmbh View from the Kitzsteinhorn at Sunset

The joy of reaching the summit of Kitzsteinhorn

Boiling and frozen water high up on Kitzsteinhorn. Water at 3,000 m above sea level can be still and sparkling. For one thing it can be found on the majestic peak of Kitzsteinhorn in the perpetual glacier ice and the fresh powder snow, for another thing the kitchen team at the mountain restaurant conjures up invigorating dishes made from pure spring water.

The boiling water bubbles away cheerily in Herbert Voglreiter’s pot. The head chef has been cooking at the mountain restaurant on Kitzsteinhorn since 2012. What is a given in the valley requires preparation here at 3,000 m above sea level as it is not a given that glass-clear water comes out of the tap. While the passionate cook mixes the spaetzle dough for Pinzgauer Kasnocken (cheese dumplings), he explains how the water supply works in this high Alpine region, “The water is first pumped from the Schwarzwand source at Langwiedboden to the Alpine Centre. There we tap it into 500-litre canisters, which are then brought up to our mountain restaurant by cable car. The water is filtered here again and goes into the tanks as service and drinking water. We would be stranded here without this supply and I wouldn’t be able to make any Kasnocken now. After all, water is the most important ingredient in any kitchen.” Even cooking at this altitude has its pitfalls when it comes to cooking times as you also have to adjust to being 3,029 m above sea level. He reveals, “The water here boils at 86 °C compared to 100 °C at sea level. This prolongs the cooking time on the mountain as the air pressure determines the temperature at which a liquid boils. Air pressure decreases with increasing altitude and, therefore, the boiling point drops. It takes exactly four minutes to cook a soft egg in the valley, up here it takes six minutes. Once you have internalised these values based on practical experience, you also adjust as a chef.” In response to my question, whether there are any dishes you can’t make at 3,000 m above sea level and higher, Herbert Voglreiter laughs and says, “Salzburger Nockerl! These sweet dumplings collapse as soon as they come out of the oven because of the low air pressure. But then the yeast dough for Wuchteln (sweet rolls) is a lot fluffier up here than in the valley.” The Nockerl dough, which the chef now drops into the boiling water, also has a different consistency than in the valley. “I had to change the recipe to make sure it still stayed robust in spite of the longer cooking time,” he claims, winking, and adds, “But I won’t tell you what the recipe is now.” While I get stuck into the Kasnocken I ask the chef to reveal what makes the perfect Kasnocken. He says, “A good cheese is important. Our Pinzgau cheese comes from alpine farmers in Zell am See!“

Next mission – the joy of reaching the summit

Revitalised, I need to continue with my next mission but before I start I fill my water bottle to the brim as the body needs a lot of water at this altitude. The blood gets thicker and without enough liquids you can get a headache or feel dizzy. And I cannot afford to get dizzy for my next undertaking. I set off on a guided tour on the summit of Kitzsteinhorn with the mountain guide Hans-Peter Untermoser and three other mountain enthusiasts. On the “Top of Salzburg” panoramic terrace, we climb into the climbing harness the mountain guide has brought, put on helmets and slip into our gloves. Hans-Peter Untermoser attaches us to the rope, gives us final instructions on how to move as a roped party on the mountain and we head off to the steep slope of Kitzsteinhorn, observed by a number of curious visitors on the panoramic terrace.

I am trudging through deep snow today where dry rock and stones dominated the route of my last ascent. Thanks to the fresh snow, this summit climb will be a new experience for me as only the footprints of my mountain guide in front of me show me the way. The cable safety devices are covered with thick rime from frost and moisture. I observe the artistic formation of the ice crystals during a break on the way up. It amazes me each time to see how water in all its different forms can be turned into such creative forms.
Step by step our roped party slowly climbs to the peak of this wonderful 3,000 metre mountain. My gaze wanders down to the perpetual ice of the glacier where in summer numerous visitors from all over the world have fun sliding across the snow. Further down, Lake Zell is still and sparkles brightly. People are probably swimming and leaping into its cool water because of the summer temperatures. In the distance, the highest Austrian emerges from behind a cloud, the peak of the Grossglockner, and I am almost disappointed when I notice that our climb is nearly over. The Kitzsteinhorn summit cross appears in front of us and after a few steps on the narrow ridge we are there. The panorama is unbelievably impressive and the clear view makes me feel as though I could touch the peaks of the mountains. The vultures are circling in the thermal lift high above us and the Mooserboden reservoir is shining like a precious emerald below us. The joy of reaching the summit can be seen in all of our faces and after a quick break we head back, smiling. My fellow climbers treat themselves to lunch at the summit restaurant but my Kitzsteinhorn mission takes me to the inside of the mountain. 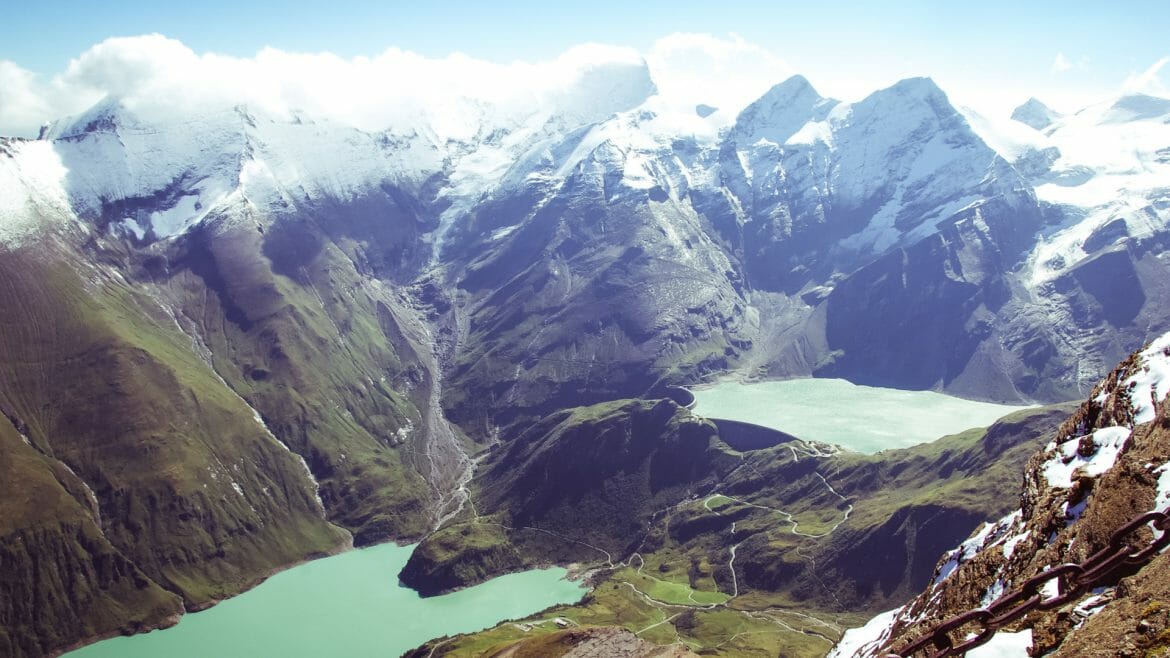 Armin Wanke, the national park ranger, takes me on a journey through time to the world of glaciers. The 360-metre long tunnel of the National Park Gallery radiates a special fascination. Here in the murk, between raw rock faces, you feel the mysticism and silence of the mountain. The only noise is the constant dripping and to me it sounds like the mountain’s regular pulse. At the six information points, the ranger tells us interesting facts about the crystal treasures of Hohe Tauern, the formation of the mountain ranges, the technology in the 3000-metre mountain region and naturally everything about permafrost and glaciers in Hohe Tauern National Park. Mesmerised, we listen to his explanations as we approach the radiant light at the end of the tunnel. After the darkness, the wide expanse, which awaits us at the end of the tour on the National Park Gallery platform, is simply breathtaking. I start my descent to the valley as after the boiling and frozen water I feel like leaping into cool water. I finish this adventurous day about the element of water in the glass-clear water of Lake Zell.