© SalzburgerLand Tourismus, Peter Zeitlhofer – In the footsteps of the water riders

In the footsteps of the Salzburg water riders

Our hike along the Glan river

The Untersberg south of the city is not only one of the most mystical mountains in the Alps, but the majority of Salzburg’s drinking water is obtained from the mountain water emanating from Grödig. Anyone who has ever tasted a sip of it knows that this water is of extraordinarily high quality and tastes great. This was already clear to the powerful prince-archbishops, who starting in the 15th century sent “water riders” to the springs every day in order to have this delivered to the royal tables. The route these impressive riders covered day after day back then can be wonderfully hiked today, and at the same time visitors can get to know the city from an unusual side.

It lies ahead of us. It is mighty and majestic, no question: the Untersberg. Shrouded in legend, it is the mountain of yearning among many alpinists and – thanks to the cable car from Grödig – it is also one of the most favourite excursion destinations for Salzburg residents and their guests. Only a few hours ago, we were still up there on the summit. We enjoyed the panorama, walked around a bit and browsed through the guidebook. There was a reference to the ‘Salzburg water riders’. It is said that in the era of the great prince-archbishops starting in the 15th century, they rode every day from the Residence in Salzburg to the Untersberg, fetched water from the springs there and then brought this back to the royal table. Even at that time they apparently knew how good it is, because today a majority of the city is still supplied with water from the springs at the foot of the Untersberg mountain range. They rode along the Glan river with magnificent, powerful horses which hardly felt the burden of the barrels and thus quickly returned to the royal court. After all, the prince-archbishops were not particularly known for their patience, and certainly nobody wanted to have them wait. The Glan river and the trail along its bank looked beautiful from the summit, and then I had the idea simply not to take the bus back to the city today, but to hike there in the footsteps of the water riders.

To Grödig, where the Glan river has its source

No sooner said than done! And now we are here, in Fürstenbrunn. It is likely that the name truly says it all, because here in the small district of Grödig southwest of the city is also the site of the springs, from whose currents the Glan river originates and makes its way towards the city and the Salzach river. Unfortunately, I cannot visit the springs because these are all located on the hillsides of the Untersberg and are hardly accessible. It’s not so bad. The Mayr-Melnhof estate, the starting point of our hike, is a more than worthy compensation. Fascinated by the beauty of nature, the estate and the castle on the nearby hill, we linger here for a while, take photos and enjoy the pleasant shade a bit. After all, the curiosity that awaits us on our route into the city is too much. Rucksacks are shouldered and we set off walking. We still have to cover a short stretch of the route through the village on less frequented roads. We greet a few people who have made themselves comfortable in their gardens before we finally set off along the Glan river and the footpath and bike trail. Beautiful vegetation lines the straight course of the stream, and we stroll towards our destination while chatting. We repeatedly look back, marvel at the elegance of the Untersberg and watch the cable car on its way from Grödig to the summit. The view from up there was beautiful, and we agree that we certainly have not seen the mountain for the last time. Maybe we’ll also hike up there again? There are enough ways and means to do so. 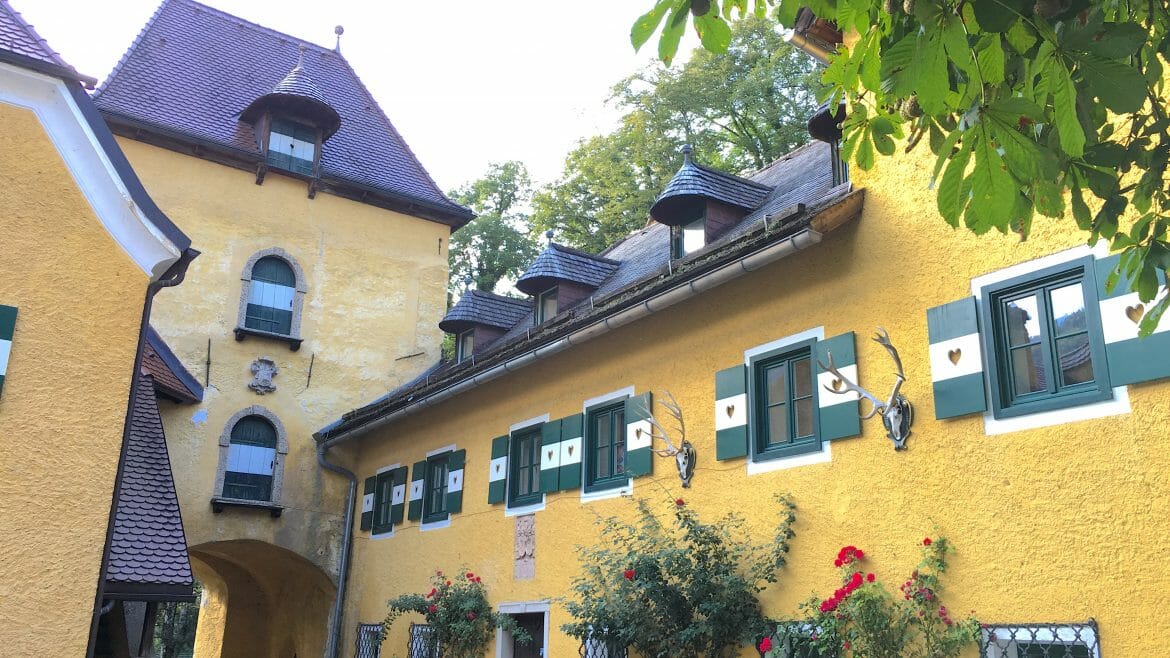 The Glan river runs towards the city over fields and meadows, past impressive farmsteads and through pretty residential areas. The city hills of Salzburg, over which the Hohensalzburg Fortress towers impressively, are becoming more clearly visible ahead of us. The Residence is located directly underneath the fortress. We will also hike there today, where the prince-archbishops resided in former times. The taste of the Untersberg spring water seems to have truly cast a spell over them, because it is not for nothing that as early as 1654, Prince-Archbishop ‘Guidobald Graf von Thun und Hohenstein’ – incidentally, one of the ‘conceivers’ of Salzburg’s baroque image as builder of the Dombögen (Cathedral Arches), Residenzplatz (Residence Square) and Domplatz (Cathedral Square) in Salzburg – tried to conduct the spring water under pressure and by means of pipelines into the city. The monumental Residenzbrunnen (Residence Fountain), still the city’s largest fountain to this day, was built especially for this purpose. Yet the attempt failed miserably as the pipelines did not withstand the engineering burdens and burst during the inauguration in 1661. Only 200 years later could the project actually also be implemented. The city’s present-day water supply was finally completed in 1875, and in addition to a 9.2 kilometre-long pipeline also includes an elevated tank on the Mönchsberg hill with a capacity of 1,000 m³. 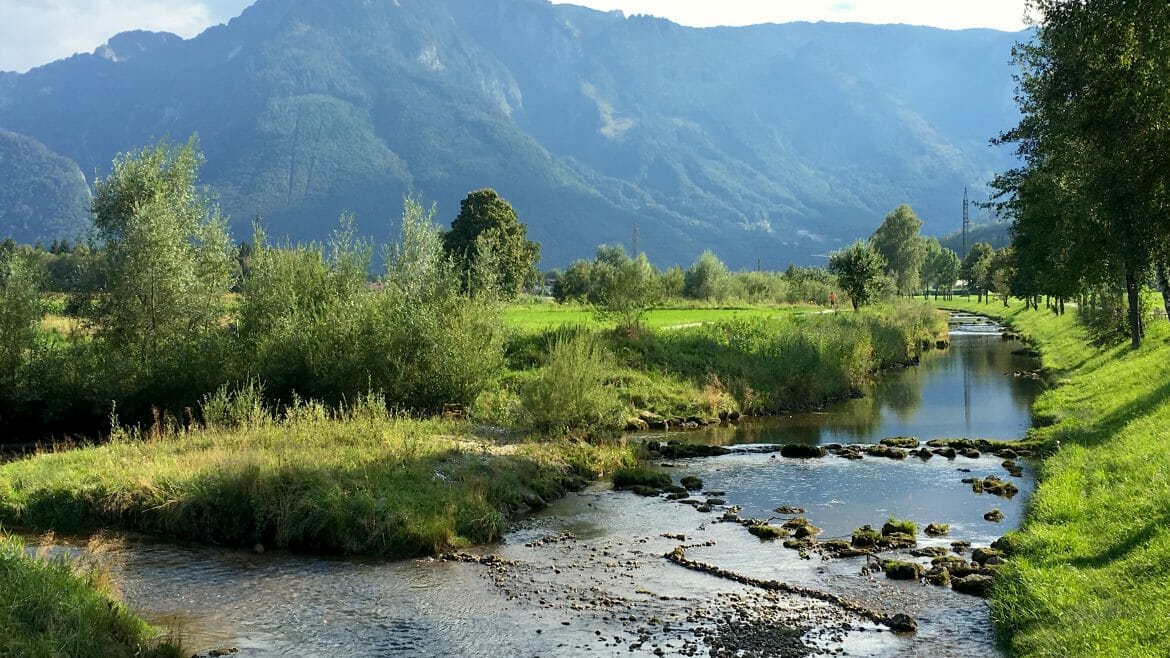 From the south into the city of Salzburg

After we have passed the Salzburg Airport and watched a departing Boeing on its way into the clouds, we very slowly reach the city limits. The residential areas become increasingly denser here, and we also notice by the number of walkers and cyclists along the Glan river that we are getting closer and closer to our goal, the inner city. A Salzburg brewery, which partially brews its delicious beer from the precious water of the Untersberg region, appears on our left-hand side. Shortly before we leave the Glan river, we walk through the picturesque ‘Riedenburg’ neighbourhood and finally reach the Neutor (New Gate). The world-famous Salzburg Old Town – incidentally, a UNESCO World Heritage Site since 1997 – is waiting for us on the other side. It is an honour which people are particularly proud of here and therefore do everything to preserve it for posterity.

The destination of our hike

We stroll through the city’s beautiful alleyways towards our goal, take photos, admire the baroque domestic architecture and lay in the sun for a while along the Salzach river together with the young people in the city of Mozart. Such is life. We finally reach Residence Square and imagine how it must have been in the 15th century as the water riders returned from Untersberg and trotted through the heavy doors of the Residence. After we have also had a closer look at the Residence Fountain, we take a seat at time-honoured Café Tomaselli and let the colourful activity take effect on us. The café was founded as early as 1700 and is therefore Austria’s oldest coffeehouse still in operation. We pleasurably take a sip of the water traditionally served with coffee and think of the beautiful hike we just completed. Now that we know where it comes from, it even tastes much better.

Incidentally, the excursion ‘in the footsteps of the water riders’ can be made in both directions and by bicycle.